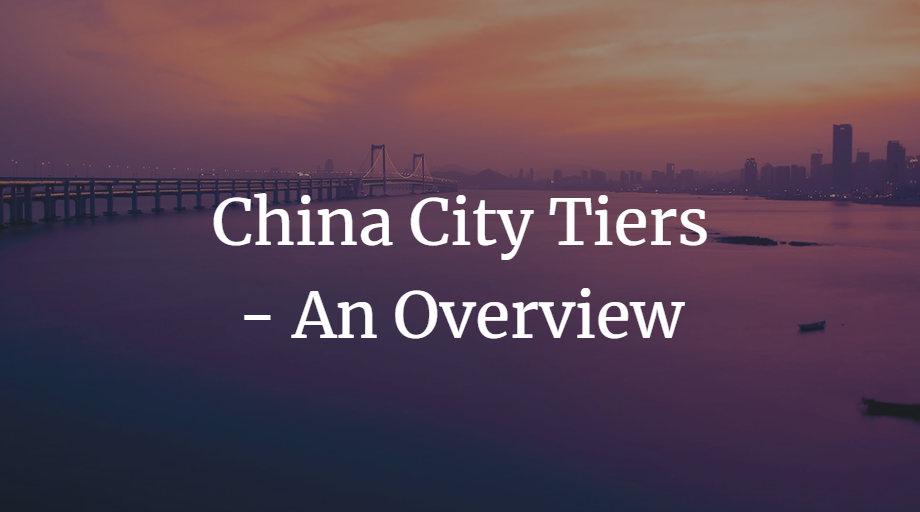 If you've ever visited China or researched the Chinese market, you will probably have heard of the concept of "China city tiers".

Brought about by the rapid growth of Chinese cities over the last 20 years, labelling a city as "1st Tier" or "2nd Tier" became a convenient way to quickly describe its relative level of development.

This article introduces and provides maps for each of the China city tiers and identifies which tier 338 different Mainland China cities are ranked under.

What are China City Tiers?

So common is the use of "China city tiers" terminology that you could be easily mistaken into believing that the rankings are an official government ranking system.

This is not the case though, the city tiers ranking system has come about in a more organic way than that.

As beautifully illustrated in this South China Morning Post piece, Chinese cities were originally grouped into 4 tiers, however a 2017 report from YiCai Global introduced a new methodology for ranking which caught many people's attention.

In this report 6 different tiers were defined, including for the first time "New 1st Tier Cities" - a tier created to reflect the rapid urban development of 15 "up and coming" cities.

We have used the tiers defined, and cities listed, in YiCai's study as the basis for creating this article.

This map shows where each of the cities listed in the China city tiers system are located.

Which Chinese Cities are in Which City Tiers?

Now we've explained a little about the China city tiers system you probably want to find out which cities are categorized as which tiers, but before we dive in here are a few things to take note of:

One thing to be aware of is that not all Chinese cities are included in this list and this is mainly because there are many "county-level cities" in China which although named "cities" are in fact usually under the administration of a nearby "prefecture-level" city.

Some more well-known examples include Yiwu (part of Jinhua), Rui'an (part of Wenzhou) and Kunshan (part of Suzhou).

Each province of China has a capital city, so to make these easier to identify we have marked them with this logo:

Searching for a City?

There are a lot of cities listed here, so to search for a specific city try hitting CTRL-F.

China's premier cities, these 4 stand heads above the competition and include some of the country's most famous districts.

In 2017 Yicai Global's report concluded that 15 Chinese cities are now emerging as new 1st tier cities and created this new label to identify them.

Based on the location and rank of each city included in China's tier system we have created this heatmap.

It clearly illustrates how the majority of major China cities are located in the Eastern coastal areas.

This heatmap was created by using the following weightings to cities from each rank: