If you saw a list of company names in Chinese it would usually be safe to assume that they are companies from Mainland China, Hong Kong or Taiwan.

But did you know there are some other countries where it is possible to register company names in Chinese?

In recent years some countries - many of which are better known as "tax havens" - have found a new stream of clients from China, a process which they help facilitate by allowing companies to be established with an official Chinese name.

What are Company Names in Chinese?

Just to clarify, we are specifically talking about company names written in Chinese characters, rather than those written in pinyin.

Here is an example of a company name in Chinese:

A translation of this name would be "Golden Arches (China) Co., Ltd." which is actually the new name of McDonalds in Mainland China after it changed it's official company name on 12 October 2017.

Which Countries Register Companies in Chinese?

The most obvious example is China which has registered over 77 million companies, but as you will be aware, China is a country with both a complicated history and a complicated present. Due to the “One Country, Two Systems” principle, it actually makes more sense to talk about "jurisdictions" in relation to Chinese company registration.

This is because Mainland China, Hong Kong, Macau and Taiwan are each separate jurisdictions when it comes to company registration.

With that brief caveat out of the way, let's introduce the countries (or jurisdictions) that register company names in Chinese. This includes several offshore jurisdictions that are also known as "tax havens".

Companies in China are only registered using simplified Chinese characters and this name is specified on their business license.

Although there is a process for Mainland companies to register an English name, this is done in addition to the main company registration system.

Unlike in Mainland China, traditional Chinese characters are used throughout Hong Kong including on the certificate of incorporation.

Traditional Chinese characters are usually the same or quite similar to their simplified equivalents, but there are some differences. E.g. the Chinese word (in Mandarin) for "Registered" is "註冊" in traditional and "注册" in simplified characters.

Similar to Hong Kong registration system, companies in Macao can be registered in either Chinese and/or Portuguese - but if companies choose to register in both of the official languages, they can also have an English version.

Taiwan has a similar system in place to Mainland China, however Taiwanese companies are registered solely in traditional Chinese, rather than simplified.

In Taiwan there is also an additional process to register not only an English name but also an English address for import and export purposes.

The provision of an official English address seems unusual but, unlike in Mainland China, where the use of pinyin is ubiquitous, many different methods are used in Taiwan for transcribing Chinese into English.

According to this article, Chinese money is flowing into (and back out of) the British Virgin Islands at a staggering rate.

This 2011 quote from the South China Morning Post explains the background to the popularity of BVI company registration in China:

A so-called satellite companies registry, replete with Chinese-language services, was temporarily established to help people set up BVI companies without leaving Hong Kong.
As they have grown richer, people on the mainland seem to have caught the BVI bug from their Hong Kong cousins.

If you receive investment from a Chinese company there is a good chance it will come through their BVI entity.

It is possible for a company to register with only a Chinese name in the Cayman Islands, but an English translation of this name needs to be included on their certificate of incorporation. Here is an example:

Vanuatu companies can be registered in Chinese, but to do so they must have a second official name which is a translation of the name into either English or French.

Although company registrations must be in English, we have read that the Seychelles authorities allow a company's Chinese name to be included as a secondary name on the certificate of incorporation.

Companies registered in Samoa can choose to be registered in any language and this has attracted some Chinese businesses to register there. Authorities may request an English translation.

Japan is a special case because the Japanese language includes kanji which are adopted Chinese characters.

As most Japanese company names predominantly use kanji in their names it is easy to mistake them for being Chinese.

For example the official name of Toshiba Corporation is 株式会社東芝 where 株式会社 means "joint-stock company" and 東芝 is "Toshiba".

It might surprise you that authorities in these countries don't allow registration of company names in Chinese:

Although more than 3 in 4 Singaporeans are ethnic Chinese, company registration in this city state is done entirely in English.

Although the Chinese languages are frequently spoken in Malaysia, especially in business, company registration must be carried out in Malay or English.

If a Chinese company has provided you with their certificate of incorporation it is important to verify that it is genuine and determine where they are registered. 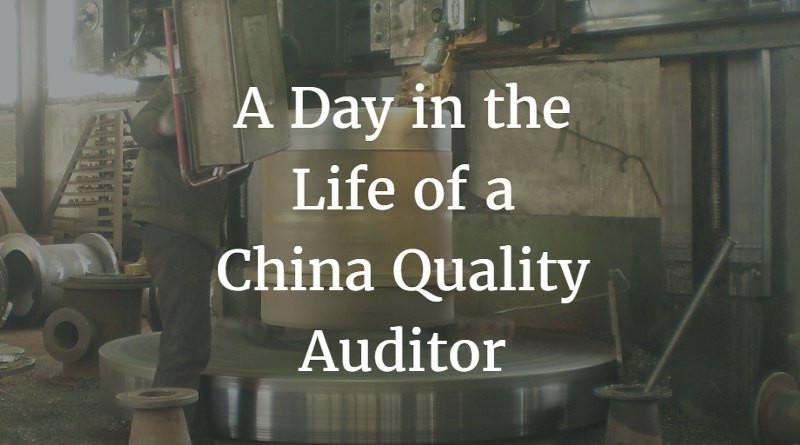 A Day in the Life of a China Quality Auditor

n this article Matt Slater shares some of his experience from 8 years auditing in China and outlines a typical day in the life of a China quality auditor.

A Day in the Life of a China Quality Auditor