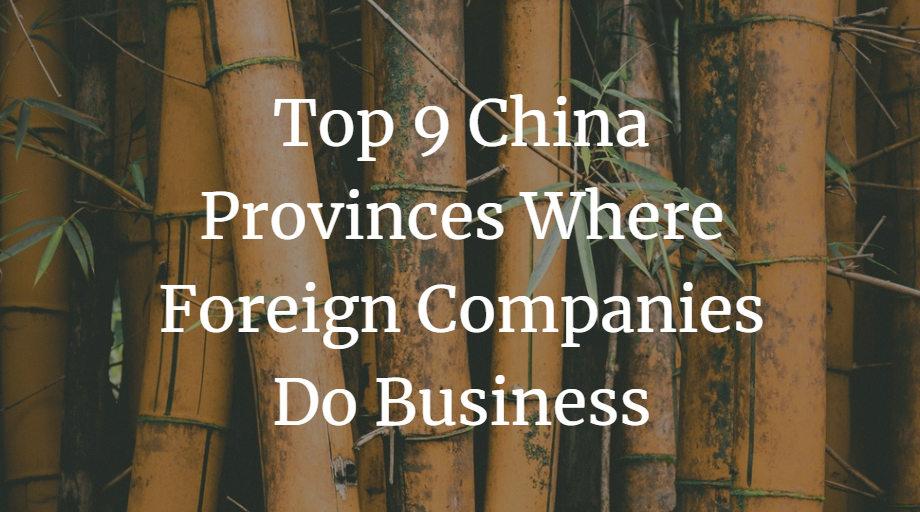 Foreign companies are doing business in China for a wide range of different reasons - including importing, exporting, setting up joint ventures, investing, developing new markets, developing new partnerships & more - but in which Chinese provinces are these efforts focused?

Is most business done in China's gateway municipalities of Shanghai and Beijing, or do foreign companies flock to the manufacturing powerhouse provinces of Guangdong and Zhejiang?

Read this article to learn what are, according to our research, the 9 China provinces where foreign companies do business the most.

Using official data sources to calculate where in China foreign companies do business would be a thankless task, as there would be so many different factors to consider.

For example - would you look at imports, exports, hotel stays, airport traffic, new companies registered, funds transferred or others? How would these factors be weighted?

Recently we realized that our own China company verification sales data actually gives quite a good representation of where foreign companies are doing business.

This is because we have been operating for nearly 5 years and have had thousands of clients coming from a broad spectrum of countries, industries and professions.

What our data shows is that the China provinces where foreign companies do business are mainly the ones where the biggest cities are located and which are most easily accessible from overseas.

As the below map illustrates, these top 9 provinces are all located along China's eastern seaboard.

Here are the top 9 China provinces where our sales data indicates that foreign companies do business the most:

Almost a quarter of the China companies we verify are from Guangdong province and amongst those technology companies from Shenzhen are very common.

Many clients who are working with Guangdong companies find that the business also has registration in Hong Kong. This can be quite a confusing situation which you can learn more about here.

Shanghai is the largest city in China and home to the

One of China's most developed and prosperous provinces, Zhejiang is a key manufacturing hub. It is also home to the world's largest wholesale market, which is located in Yiwu city.

As the national capital and one of China's four 1st Tier Cities, Beijing is home to many multinational headquarters & state-owned enterprises and has the highest concentration of companies in Mainland China.

Interestingly, Beijing Municipality is the only province in this list which doesn't have a coastline so most of Beijing's imports & exports pass through Binhai port in Tianjin.

Home to 18 high-tech zones, Jiangsu has a strong economy which is focused around the Yangtze River Delta economic region in the south of the province.

Located between Guangdong to the south and Zhejiang to the north, Fujian's economy is supported by a strong light industry sector built around the province's coastal cities.

Hebei may not have a major airport right now, but that is set to change. Beijing Daxing International Airport is currently under construction and is located on Beijing's border with Hebei province. The airport, which is expected to become the world's largest, is scheduled to open in late 2019 - read latest progress here

Another move which promises to bring development to Hebei is the establishment of the Xiong'an New Area (雄安新区), as it is intended that many "non-core" functions will be moved here from Beijing.

Tianjin is one of mainland China's 4 municipalities - the others are Beijing, Shanghai and Chongqing