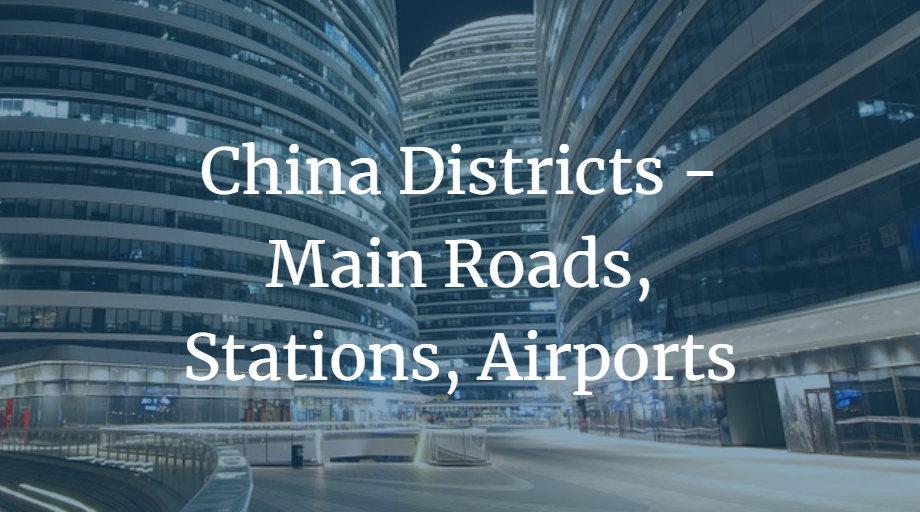 This useful resource identifies some key China districts and provides details of their important roads and transport infrastructure.

With China having some of the world's biggest cities it can be important to know in which city district an office, hotel, factory, road or train station is located.

Some China districts have populations the size of whole nations. For example, more people live in Shanghai's Pudong district than live in the Republic of Ireland!

What are China Districts?

Similar to how New York is divided into the 5 boroughs Manhattan, the Bronx, Queens, Brooklyn, and Staten Island, Chinese cities are divided into districts.

In Mainland China a "district" is a subdivision of a city, and generally speaking the larger a city is, the more districts it will have.

Each district within a city operates with a degree of autonomy and this means businesses in different districts can be subject to different regulations.

All kinds of cities in China, including Tier 1, Tier 2 and Tier 3 cities, are subdivided into districts, including the 4 municipalities, each of the provincial capitals and many more.

The most populous China district is Pudong, in Shanghai with over 5 million residents.

There are 4 cities in Mainland China which are classified as municipalities - Beijing, Chongqing, Shanghai and Tianjin.

These self-governing cities do not belong to any province, giving them the flexibility to implement change faster.

Chongqing is by far the largest of China's 4 municipalities and includes a land area over 5x greater than the next biggest, Beijing.

Indeed there are two actual Chinese provinces which are smaller than Chongqing - Hainan and Ningxia.

Many of Chongqing's districts are located far from Chongqing city and are quite rural in nature, so for this reason we have concentrated our efforts on detailing the 9 districts located in central Chongqing.

Aside from the 4 municipalities, there are a further 15 sub-provincial municipalities which, whilst belonging to a province, are still given a high degree of autonomy with regards to managing their economy and with law.

Most of these cities are provincial capitals, but not all - neither Ningbo, Qingdao, Shenzhen or Xiamen are capitals of their provinces.

Here are the districts in some of China's most important sub-provincial municipalities: