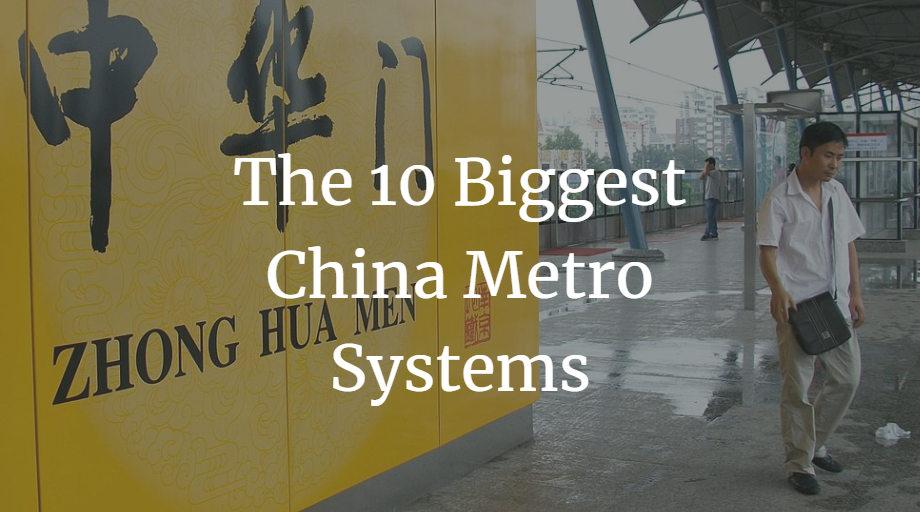 During the last decade there has been incredible growth in China metro systems, with cities across the country investing huge sums on improving their transit infrastructure.

This remarkable transformation has resulted in China now having 7 of the world's 12 largest metro systems, with many more under development.

Read this article to discover the biggest China metro systems and learn about the development of this industry.

New metro systems have been appearing in cities across China at an incredible rate in recent years.

Cities, where just 2 decades ago most people commuted by bicycle or trolley bus, are now home to extensive modern subway systems which allow residents to quickly travel across town in comfort.

If we have prepared this article just 9 years ago there would only have been 10 mainland China metro systems to list, yet today there are 30 already in operation with many more under development.

Another significant point is that China's existing metro systems are also developing fast. When I first moved to Shanghai in 2006 there were 5 lines in operation. Today, Shanghai has the world's biggest metro system with 16 lines operating. The change has been remarkable and happened so incredibly fast.

One impressive feature of many China metro systems is the way they have helped Chinese cities to create integrated transport systems by connecting train stations, airports and bus stations

These features, plus the fact that so much of the infrastructure is brand new, make business travel in China a much more efficient and convenient process then in previous years

Where are the Biggest China Metro Systems Located?

It is of no surprise to find that the biggest mainland China metro systems are located in some of China's biggest cities including Shanghai, Beijing and Guangzhou.

Of the top 10, only Dalian and Shenzhen metro systems aren't located in provincial capital cities.

Take a look at how the 10 biggest China metro systems are distributed across the country:

Before introducing the top 10, let us first define "biggest". We have ranked the top 10 in order of system length - i.e. the total km of track.

Here are the 10 biggest China metro systems in order of system length:

Although it only opened in 1993, Shanghai has already overtaken London to become the world's largest rapid transit system by route length. It hasn't finished growing yet though. With more construction currently being undertaken, Shanghai is due to have over 800km of track length by 2020.

Beijing was the home to the first China metro system which opened in 1969. Today it has 22 lines and is the world's busiest in terms of ridership with around 10 million trips being taken every day!

Capital of Guangdong province and home to the Canton Fair, Guangzhou is a city often visited by foreign businesspersons. Announcements on the Guangzhou Metro are made in Mandarin, Cantonese and English.

As only the 14th biggest city in China, I was surprised to find out that Nanjing's metro system is so well developed. Nanjing's Xinjiekou station has an impressive 24 exits, which even make the locals confused!

The only metro system on our list that connects with a land border. Shenzhen Metro has expanded rapidly in recent years and you can now travel conveniently from Shenzhen Bao'an airport to the Hong Kong checkpoint by metro.

As a mountainous city, Chongqing is not the easiest place to build a metro system. Perhaps this is why they even have a metro line which passes through a residential building - check out this incredible image of Liziba Station on Line 2:

Wuhan is the only metro system here I have yet to ride on, so I need to plan a visit! There are plans afoot to develop Wuhan metro into one of the world's largest so watch this space.

When I visited Chengdu in 2008 I remember an incredible amount of construction underway on Renmin South Road in the heart of the city - literally half of the main road had been dug up to create a huge hole. This would have been for construction of Chengdu's first metro line which opened in 2010.

One of 4 municipalities in Mainland China, Tianjin started construction of the country's second metro system as early as 1984. I really like the Tianjin Metro logo which really gives the sense of travelling underground.

Dalian, in Liaoning province, is a fantastic coastal city which is well worth a visit. Taking their metro system is a great way to get around. Liaoning's capital city Shenyang also has a metro system but isn't big enough make our top 10.

As recently as October 2016, Chinese state media was reporting that the approval process for new metro systems would be accelerated, leading to RMB 1 trillion in investment by 2020.

However, little over a year later, construction of Baotou metro in Inner Mongolia was scrapped as authorities signalled a more cautious approach to developing new metro systems.

The government's moves to ensure infrastructure is built in a more sustainable manner clearly makes sense so the pace of growth may drop off.

Despite this, I expect we'll see plenty more investment in China's metro systems as a whole industry has been created to support the development already undertaken.

No doubt this article will need regular updates in the future to keep up with the changes!