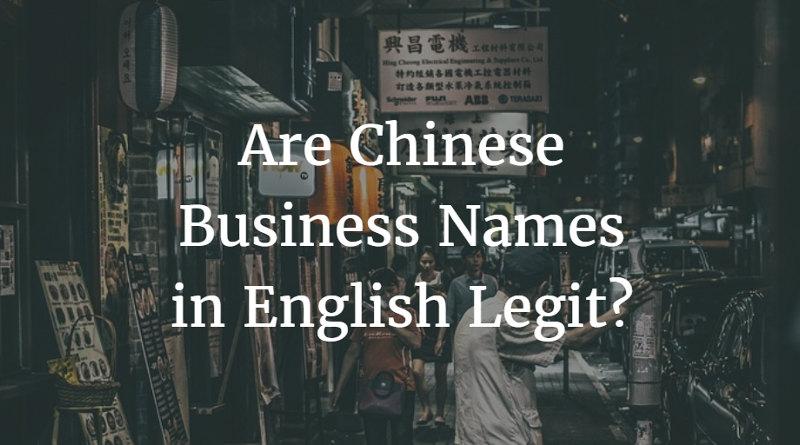 As a foreigner, when you read Chinese business names in English you naturally assume that the name you are reading is the name of the company.

In Mainland China and Taiwan, and this can be difficult to comprehend, the only official Chinese business names are those written in Chinese characters, which means the English names are usually just translations.

This begs the question, what do Chinese business names mean and represent when they are written in English? Are they just translations or can they also be legit?

Can Chinese Business Names Officially be in English?

Although there are some exceptions, when a company is newly registered in Mainland China or Taiwan the process doesn't allow for an English name to be officially registered.

This means that in most circumstances, only Chinese business names actually written in Chinese characters are official.

There are, however, many circumstances where a Chinese company needs an English name, such as:

Although not included in business registration, there are some processes that Chinese companies can take which have a secondary benefit of formalizing their chosen English name.

For example, in Mainland China foreign trade registration with the Ministry of Commerce of the People’s Republic of China (MOFCOM) includes registering an English name. In our experience though, less than half of the companies we verify have undergone this registration.

Companies in other jurisdictions can also be registered with official Chinese names too.

Explaining this important issue with words alone can be quite difficult, but fortunately we have a fantastic example to share with you in this article – from a hotel in Taiwan which appears to have 3 different names.

Although this example is from Taiwan it could equally apply to a business in Mainland China.

Welcome to the New Osaka Hotel

Carefully look at the three images below, which were each taken at a hotel in Kenting National Park in the south of Taiwan:

To non-Chinese readers, your eyes are naturally drawn to the English words, and you would think that the images relate to 3 different hotels:

Have another look though and you will notice that they have more in common than first meets the eye:

What Difficulties did this Cause?

Imagine you have booked online a room at the “Shin Osaka Hotel” and you only know their address in English, it is dark and raining and you’re feeling more than a little lost. This was the situation I found myself in, whilst working as an auditor in Taiwan, one evening in July 2012.

Fairly sure that I was walking along the right road, ahead of me I saw a hotel which seemed to be in just the right spot. “Fantastic” I thought, I’ve found it! However, as I got closer the name revealed itself not to be the “Shin Osaka Hotel” as expected, but the “Xin Da Ban Hotel”.

Initially perplexed, I was staring at my map and scratching my head looking for answers when it clicked – “Da Ban” is the Chinese word for “Osaka”, and “Shin” is similar to “Xin” – this was the right place after all.

Fortunately my Chinese skills were sufficient to solve this riddle, but if you've visited China or Taiwan before, I'm sure you can imagine the mayhem this situation could have caused!

Why did the Hotel Name have 3 Translations?

The three names photographed (there may have been more I didn’t spot!) are:

To many Chinese companies, having an English name or displaying English text can be more about portraying an “international” image, than for practical economic reasons such as attracting foreign clients to their business.

This is especially the case for Chinese companies with a domestic focus, who often have no English-language skills and for whom choosing an English name is almost something of a novelty.

The results of this can be hilarious when ridiculous English business names are inadvertently chosen.

Without the hotel's management putting any focus on maintaining the integrity of their company’s English name, it is likely that English translations were made up on an ad-hoc basis when various items were ordered from different suppliers.

It’s very doubtful that the owners of this hotel will ever read this article, but if they do, our advice would be to choose one English name and stick to it!

Why Knowing Chinese Business Names in Chinese is Vital

Although this example may seem specific to the difficulties of travelling in Taiwan, it is actually symptomatic of a much wider issue of doing business anywhere in Mainland China or Taiwan – the disconnect between the Chinese and English versions of Chinese business names and how English names can be misleading.

Whether in Mainland China, or as in this case, Taiwan, it is important to remember that it is the Chinese business names in Chinese that counts. This applies as much for trying to track down your hotel late at night as it does for placing an order with your Chinese supplier.

Another important consideration is more formal business documentation, such as contracts, invoices and even company literature. In many of the scams that we see, there is either a lack of Chinese text or a level of ambiguity which makes it difficult to pinpoint whether or not there is a registered entity behind the scheme.

Even if you are unable to read Chinese, the fact that a Chinese company is willing to put their company’s name in Chinese on such documents gives some reassurance that they are being transparent about who they are and their dealings.

We recently heard from a U.S. trademark attorney about the difficulties Chinese companies face:

Our advice to the attorney was to request his Chinese clients to provide a copy of their China Foreign Trade Registration Certificate which is the most common way for Chinese companies to officially register an English name.

When visiting China, especially outside of the big cities, if possible always try to get names and addresses written in Chinese characters. If you are staying in a hotel, ask the reception to help you with this.

For the majority of Chinese people, invariably including taxi drivers, English isn’t understood and pinyin is like a foreign language and your attempts to read it will be greeted with nothing more than a puzzled look.

Dealing with Chinese companies can be very confusing and the ambiguity relating to the use of both English and Chinese business names is certainly a factor in this.

Even though there are many occasions when a Chinese company must use an English name, for example to accept an international bank transfer, there are also good reasons to be concerned if requests to provide their official Chinese company name aren't met.

Verifying a Chinese company is a good way to determine their official company name and ensure that it is being used on key documentation.