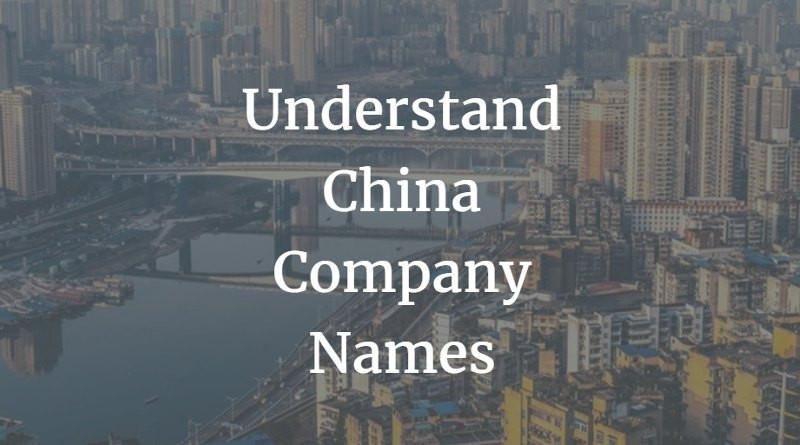 Secondly, China company names follow a set structure that is required for the official registration process.

This article offers our explanation of how China company names work and how to break them down.

Note that this article is specifically about companies registered in Mainland China and that companies can be registered with a Chinese name in other countries too.

A Note on English Company Names in China

Before we describe how China company names are structured, we’d like to explain the situation with English company names in China.

This means that any English company names you come across in China are very likely to be unofficial names that have not been registered and can be misleading.

Chinese companies engaged in foreign trade can apply to register their English name with the Ministry of Commerce however.

You can find out what officially registered name a Chinese company has by requesting a copy of its business license.

Whilst the idea of unofficial and unregistered China company names may sound alarming to you, especially if you’re only dealing with a Chinese company using English, it’s important to remember that this situation is very normal in China. The official language of China is of course Chinese, so it’s only natural that the vast majority of registered company names are also in Chinese.

This is not an issue until, for example, you need to make checks on a Chinese company’s official registration record. Normally this can only be done using their Chinese name and not their English name, a situation our company verification reports can assist with.

With that explanation out of the way, let’s have a look at how China company names are structured.

If you’re sourcing from China or doing business with a Chinese company, in most cases you’re likely dealing with a domestic Chinese company. By this we mean that it’s a Chinese-owned company rather than a foreign-owned one. The names of these companies have a specific structure, with elements appearing in the following sequence:

Let’s have a look at each of those components one by one.

The first part of a domestic China company name is its registered location. As a general rule, Chinese location names come in groups of three characters: the actual name of the location tends to be two characters, and this is usually followed by a third character indicating what kind of location it is. A province will be indicated with 省 (shěng), a city with 市 (shì) and a county with 县 (xiàn). Most commonly, you see Chinese company names with one category of location given, i.e. just the province or just the city. Occasionally you also see Chinese company names that give the province and the city within the province as well.

You might also consider the relative size, importance and affluence of the city or province. These are of course just rules of thumb, but they can be useful first-glance hints as to how large a company is.

Here are some China company names that you might come across, with the location highlighted in bold:

All of these names give just one category of location: we’ve got a province (省), two cities (市) and a county (县) in the company names there. There’s also an exception to the ‘three characters’ rule in location names. The last company name has a two-character location name: 费县 – Fei County.

This part of the China company name is a little bit difficult to describe. We’ve gone with ‘chosen name’ here. It’s simply the part of the registered name that the company can freely choose.

This is the actual day-to-day name of the company, if you like. Some thought will have gone into this on the part of the company, to try and produce something unique, memorable and pleasing to the ear. There’s also something of a trend for names that don’t mean anything in particular but sound like transcriptions of foreign company names.

Certain characters crop up quite often in this kind of name. They may be intended to make a company name sound more modern or impressive.

Let’s have a look at those company names from above again, this time with the ‘chosen name’ highlighted:

Each of the ‘chosen names’ shown here consists of two characters, but Chinese companies’ chosen names can vary from two to several characters. If you can read Chinese or get the chosen name translated, you will often find that it seems quite ‘grand’ or ‘over-the-top’ in English.

Whilst Western company names tend to be a bit lower key, Chinese company names often take the opposite approach and go for something very bold. Also, as we mentioned above, many Chinese company’s chosen names do not mean anything in particular in Chinese, but are instead intended to mimic an English name that they have chosen.

What the Company Does

After the ‘chosen name’, a China company name will usually include a very brief and general description of what the company actually does or the field it works in. Examples in English might be ‘automobile parts’, ‘safety products’ or ‘business consulting’. These descriptions vary in how vague or specific they are.

Let’s have a look at our four company names once again:

The first company describes itself as producing 反光材料 – ‘reflective materials’. We’ve also got two companies categorizing themselves as 劳保用品 companies – ‘worker safety products’. The third company in the list is pretty vague, only giving 科技 as its field – ‘technology’.

The final part of a domestic Chinese company name will give its type. This is not the field it works in or what it produces, but rather the kind of entity it is officially registered as. The most common type is 有限公司 – “limited company”, which is the official short form of 有限责任公司 – “limited liability company”. These terms appear in all of our four examples of company names below:

Other business types you might see on the end of a China company name include 总公司 (Corporation), 厂 (factory) or 院 (institution), for example. When a company's name ends with "总公司", it's usually a state-owned company.

More detailed information on a company’s type is available on its business licence and examples of these are included in our Chinese Company Type Terms Glossary.

Finally, let’s do a complete run-through of a domestic China company name to see how it relates to its English equivalent.

We’ll use the first of the example China company names from above: 河南省豫新反光材料有限公司.

In English this company might be called ‘Henan Yuxin Reflective Materials Co., Ltd.’ This is an extremely common format for domestically owned China company names.

You can take a look at some of the most popular China company names components in section 3 of this article.

This is pretty much just a re-arrangement of the sequence for domestically owned companies, and with the location enclosed in brackets.

Let’s have a look at the name of a Japanese company you may well have heard of as an example. Fujitsu operates a subsidiary in Shanghai manufacturing semiconductors, it’s name is 富士通半导体（上海）有限公司 – Fujitsu Semiconductor (Shanghai) Co., Ltd.:

Only foreign-owned companies are permitted to have a company name beginning with the ‘chosen name’ and giving the registered location in brackets.

Note that if a Hong Kong or Taiwan company was to setup a Mainland China company it would be considered to be a Foreign-owned entity.

Finally, a quick note about the names of state companies. In China, only nationally-owned state companies are permitted to have names beginning with 中国 (‘China’). Examples of such companies include:

These names are often rendered as ‘China …’ or ‘… of China’ in English. In any case, any company with such a Chinese name is a state owned one. All other companies must have names that begin with either their registered location (domestic companies), or their chosen name (foreign owned companies).

Although there are relatively few cases, it is possible for a company to be registered in Mainland China but not have a “registered location” in their name.

In order to apply for such a name a company must satisfy the following requirements: