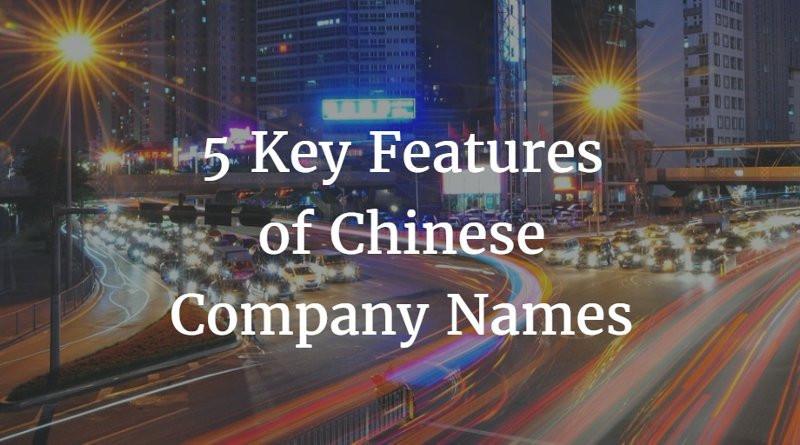 Nearly all Chinese company names follow standard patterns and by just reading a company’s name and understanding these 5 key features you can already learn quite a lot about them.

For example, where they are registered, what they do (in a broad sense), whether or not they are foreign-owned and their general incorporation form.

This article, which includes many standard Chinese terms with English translations to illustrate our points, can help you to easily “break down” Chinese company names and better understand the companies in China you are dealing with.

Note that this article is specific to companies registered in Mainland China, although there are other jurisdictions where companies can register a Chinese name.

1. How the Name is Structured

Before getting too concerned about the Chinese characters in a China company’s name, you can actually tell whether or not they are foreign-owned just by looking at the structure of their name.

As you can see, foreign-owned Chinese company names include the registered location in brackets after their chosen name.

2. Where the Company is Registered

Chinese company names include the location where the company is registered.

Companies in Mainland China are registered by a branch of the AIC and this registration may be at the local, city, provincial or state level.

A Chinese company name usually just includes the name of the location (e.g. 深圳 for Shenzhen) but may also include the relevant character for county (县), city (市) or province (省). Companies registered at the state level meanwhile include the Chinese characters for China (中国) as the registered location.

In the table below we have identified each of Mainland China’s provinces (including municipalities and autonomous regions), their capital city and the other major cities in each province.

Remember that the characters for city (市) or province (省) may or may not be omitted from official Chinese company names.

The chosen name of the company makes it stand out from the crowd. It is often used for the company’s branding and is typically 2 to 4 characters long. The reasons why companies in China decide upon their “chosen name” can be very diverse and often reflects the character or goals of their owners.

In China, because company names are generally-speaking only officially registered in Chinese, translation of this part of the name into English becomes a proverbial minefield. This is particularly the case for foreign companies (and domestic companies that want to sound like foreign companies) as their Chinese name may only be loosely related, or even completely unrelated, to their English name.

With over 50000 characters in the Chinese language there are an almost unlimited number of potential chosen names, but there are certain characters that seem to be regularly used in Chinese company names. For example the characters 龙 (dragon), 达 (success), 福 (wealth), 富 (rich), 新 (new), 鑫 (prosperous), 金 (gold), 利 (profit), 力 (strength) and 特 (special) seem to come up regularly.

By taking data from a number of sources we have compiled a list of some of the most common Chinese company “chosen names”. The list includes chosen names in pinyin and their corresponding Chinese characters.

4. What the Company Does

Readers from many countries may be surprised to hear that Chinese company names actually include a brief description of the company’s main activity!

Although a more in-depth description of a company’s activities are provided in the business scope section of their business license, being able to read a company’s Chinese name can be very useful in some cases, for example when identifying that a company claiming to be a manufacturer is actually a trading company.

The list below is arranged alphabetically based on our English translations of common Mainland China “what the company does” names. You can click on a letter to find the result you require.

Using the search tool is also an invaluable tool , particularly for searching in Chinese. For example, if your supplier’s name contains the characters “出口” you can search to find that they are involved in exporting.

In China the majority of companies you are likely to encounter are limited liability companies which is formally written as “有限责任公司”, but the official abbreviation “有限公司” is more commonly used.

However, there are other incorporation forms in Mainland China, which you can identify in the table below:

Note that a more detailed description of Chinese company types is provided on a Chinese company’s business license, and a glossary of these terms is presented here.

A Note About Chinese Companies and Their English Names

Because, generally speaking, foreigners can’t read Chinese characters (and neither can the banks that process their payments), it is often necessary for Chinese companies to choose an English company name.

In an ideal world Chinese companies would choose English names that are direct translations of their Chinese company names. In practice however, they more often than not don’t follow this methodology – for a number of good reasons:

Sometimes this can lead to company English names that are misleading.

It is for this reason that when China Checkup prepares our verification reports, identifying the company’s Chinese name is a critical step.