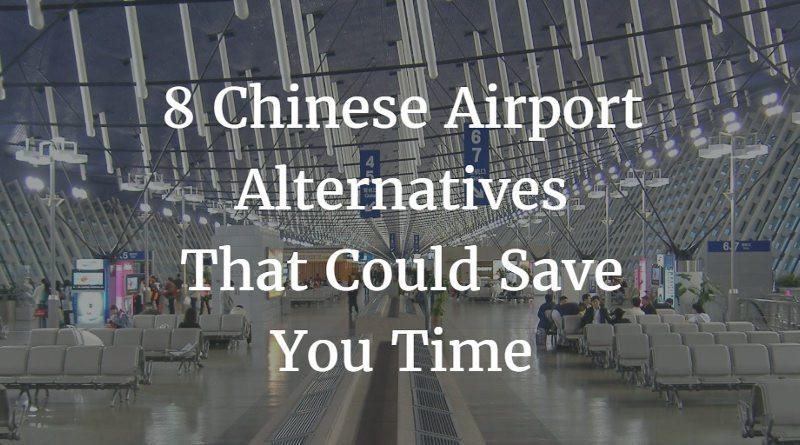 Carefully planning which Chinese airport to fly to or from can have a huge impact on how smoothly your business trip to China goes.

Having travelled extensively throughout China for work, I am always looking for ways to decrease the amount of time spent on highways and flying to a closer airport is one great way to do this.

From my experience I have found that flying to each Chinese airport identified in this article can, in the right circumstances, can save you time, money and hassle.

Examples of Flying to the Wrong Chinese Airport

Before going ahead and introducing my Chinese airport recommendations, I think it is worth telling a few stories to illustrate what can go wrong when travel plans aren’t well considered and the wrong airport chosen.

I was once flying back to Shanghai from Shenzhen when the gentleman next to me asked “is this flight going to Pudong airport?”. I had to explain to him that we were flying to Hongqiao and that two hours probably wouldn’t be long enough for him to get to Pudong to make his flight to Los Angeles, if he took the metro.

Whether or not he made his flight I’m not sure, but hopefully my recommendation of getting a taxi would have given him half a chance.

I visit a lot of Chinese manufacturers and one thing I like to do is choose a hotel which is close to their factory. This might mean I get to the hotel a little later at night, but it also means that I can wake up a little later the next morning and that the factory doesn’t have to send a driver such a long way to pick me up.

Chatting with factory owners, one of the things that annoys them is the expectation of some foreign clients that the factory is to pick them up from excessively far away places. Ten years ago when business in China was a lot easier, and infrastructure a lot less developed, it was more understandable.

But these days, the modern Chinese airport offers good transport links and it is usually quite convenient to get close to where you need to visit. Good accommodation is also plentiful in most cities.

For the sake of maintaining a good relationship with your supplier, stories of factories in Nanjing making 8 hour round trips to collect guests from Pudong airport should be a thing of the past.

I once had a colleague in Australia who needed to travel to Zhongshan in Guangdong province. The simple way to do this would have been to fly to Hong Kong and get the airport ferry direct to Zhongshan.

Instead, the travel agent booked him an additional connecting flight from Hong Kong to Guangzhou Baiyun airport, which meant an additional 2 hour taxi ride to finally get to Zhongshan.

Added together, this completely unnecessary extra flight probably added 4 hours and a lot of discomfort to his journey. Not ideal after a red-eye flight and when you have to make a presentation the next morning.

Going on a business trip to one of China's many provinces? Need to visit Taiwan?

By carefully planning your trip you can save hours wasted in taxis and on the road to and from factories, giving you more time for rest and relaxation (or preparing for your meetings!).

Instead of just flying to a major Chinese airport such as Shanghai Pudong, Beijing Capital, Hong Kong or Taipei Taoyuan, consider using one of these alternatives and get to your destination faster.

As a military airport, Beijing Nanyuan restricts the civilian airlines that can fly there to just one: China United Airlines, but don’t let that put you off,  this airline regularly flies to approximately 50 destinations in Mainland China.

Although it lacks the facilities and transportation options of Beijing Capital – the busiest Chinese airport – flying to or from Beijing Nanyuan can be a great time saver if you are staying in the south of Beijing or visiting nearby cities such as Langfang.

Note that Beijing Nanyuan is due to be closed in late 2018 when construction of Beijing's new Daxing airport is completed.

The small island of Kinmen is located just a short ferry ride from the bustling city of Xiamen, in Fujian province. Despite being over 200km from Taiwan, it is officially governed by Taiwan, although considered by both sides to be part of Fujian!

Many Taiwanese, in particular, take advantage of these unusual circumstances to travel inexpensively between Taiwan and Mainland China on a cheap domestic flight to Kinmen and catching a connecting boat to Xiamen.

This route has also been available to foreigners for nearly ten years now and a combined flight & ferry ticket can be purchased with relative ease. The ferry to Kinmen is an interesting experience which involves passing propaganda signs promoting reunification.

I have used this service previously to fly to Tainan which was fantastic as the airport is only a ten minute drive from the city center.

Thanks largely to its casinos, Macau’s airport offers a surprisingly large number of destinations throughout Asia and Mainland China and it can be a useful transfer airport.

For example I have flown from Shanghai via Macau on the way to Hanoi and Bangkok in the past.

Macau also offers excellent connections to downtown Zhuhai (via a land border which can get busy) and by ferry to Shenzhen and Hong Kong.

As a compact airport with good transportation options, getting in and out of the airport is convenient and fast.

The lesser-known of Shanghai’s two airports, Hongqiao is actually one of China’s busiest, and in my opinion, best business airports.

The one thing Hongqiao lacks though, is the range and quantity of international flights which often makes flying to Pudong airport unavoidable. There are however, a reasonable number of flights to Tokyo, Seoul, Taipei, Hong Kong & Macau which depart from Terminal 1.

Unless you are staying in the east of Shanghai (i.e. in Pudong) or have urgent international connections to make, utilizing Hongqiao airport for domestic flights is highly recommended.

It is also well situated for onward travel to the major business centers in Jiangsu and Zhejiang.

The development of Shenzhen’s stunning new terminal 3 has led to increased capacity and opened up many new domestic and international routes. Although most of these international flights are to destinations in Asia, Air China’s flight to Frankfurt signals the ambitious plans for this Chinese airport.

With the recently opened Metro line 11 supplementing the taxis and shuttle buses, travel to the city and onward to Hong Kong has never been easier.

Located to the west of Shenzhen downtown, the airport is also well located for travelling onwards to Dongguan, and to a lesser extent, areas south of Guangzhou such as Nansha and Shunde.

There are also ferries operating from the nearby Fuyong pier which helps connect Shenzhen airport to Macau and Hong Kong.

The futuristic design of this airport is really quite spectacular and well worth a look.

Whilst the majority of international visitors to Wuxi and Suzhou fly into Shanghai, there is another option which lands much closer to your destination – the confusingly-named Sunan Shuofang International Airport.

Previously named Wuxi Shuofang Airport, it was re-named “Sunan” (which means “South Jiangsu”) in 2010. Although the airport is located in Wuxi, it is also owned by Suzhou city, which presumably pushed for the re-name!

Although fairly modest in size, this airport serves an impressive number of international destinations including Bangkok, Taipei, Hong Kong, Singapore and Tokyo. If you can get a connecting flight via one of these hubs it could well be worth looking in to.

Most visitors to Taiwan arrive at the huge Taipei Taoyuan airport which is located in Taoyuan, which is actually a completely different place to Taipei!

Although construction of an impressive new highway has made the journey to and from Taipei city much easier, the airport is still located quite a considerable distance from town.

When I fly to Taipei I much prefer to fly into Taipei Songshan airport, which is located so close to the city center that it ranks #5 on the world's most convenient airports.

It makes for a much easier journey and you get some fantastic views of the city whilst coming in to land. The only drawback is there can be a bit of turbulence flying into this airport I have noticed.

Songshan has its own metro station which is only a few stops north of downtown. Taipei HSR station is also readily accessible via metro or you can simply catch a taxi there for travel to other cities.

As a fairly compact airport you can get it and out fast, and with flights to cities throughout Mainland China and East Asia it is fairly well connected.

First of all I have to admit that I don’t really like this airport. It is located in quite an awkward position by the sea quite someway south of Zhuhai. Macau airport is actually much closer to Zhuhai’s city center!

As one of the earlier airports to be developed it is also showing its age a little bit and has none of the glamour of the newer Guangdong airports in Guangzhou and Shenzhen.

So why did I include it? 2 reasons: