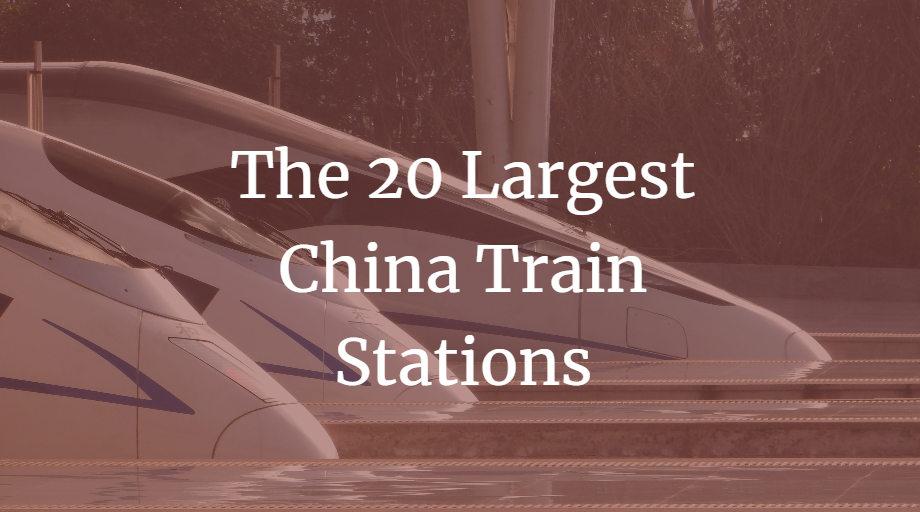 In recent years a myriad of huge China train stations have been built to complement the development of China's new high speed rail network.

Whilst much of the focus goes on the newly opened lines and their train speeds, it is often overlooked that a huge number of impressive railway stations have been constructed and refurbished, from single line commuter stations to cavernous city terminals.

In this article we introduce the largest China train stations which can be found across this vast nation.

China has had a substantial railway network for many years, but it is only with the development of high speed rail in the last decade that their massive stadium-sized train stations have emerged.

To complement the astonishing 22,000km of high speed rail lines built, vast numbers of purpose built train stations have been constructed. Many of these train stations are so large that it makes more sense to compare them to airports, such is their scale.

Remarkably, each of the 20 largest China train stations have either been comprehensively refurbished or newly built in the last ten years.

Where the Largest China Train Stations are Located

As you'd expect, some of China's largest stations are located in the big cities such as Beijing, Shanghai and Guangzhou, but there are also a surprising number of stations in less well-known cities that have made this list.

These are distributed widely across the country as can be seen from this map:

Before we could prepare this article we first had to decide how to define "largest". Many of these stations are really new so it was difficult to find data on the number of passengers or total station area.

What we were able to determine though was the number of platforms at each station, and using this measure the largest China train station is Xi'an North which has 34!

Here are the 20 largest China train stations in order of number of platforms:

Historically the eastern starting point of the Silk Road, perhaps it is only appropriate that in the age of 'One Road, One Belt' Xi'an plays home to China's largest train station.

In July 2008 when I travelled from Shanghai to Zhengzhou the only option was an overnight sleeper train. That same journey today can be done in just 4 hours.

Connected to one of China's most useful airports, Shanghai's Hongqiao train station is a massive facility with services to all over the country.

I have regularly visited the station for many years and it's sheer size never fails to impress. The photo above was taken in 2015 whilst waiting for my train in the station's upstairs food court, which can be a good place to wait to get away from the crowds.

Kunming is the capital of South West China's Yunnan province and is considered the gateway for southern neighbours Vietnam, Laos & Myanmar.

With construction underway on multiple sections of the proposed Kunming-Singapore railway it is hoped that one day a train trip between the cities might take just 10 hours.

I travelled to Nanjing South Railway station in 2015 whilst visiting Nanjing for an audit and took the above photo. It is a truly massive train station.

The above photo was taken when I visited Hangzhou in 2013. With pink neon lighting throughout both its interior and exterior this station certainly made an impression!

Located in one of China's less developed and remote provinces I was a little surprised to see Guiyang's North station make this list, but this 2014 built station houses an incredible 28 platforms.

Home of the Panda and China's spiciest hotpot Chengdu is a fantastic city for tourism. With the recent completion of the Chengdu to Xi'an high speed rail line this station is sure to look busier than when the above photo was taken!

Chongqing is one of the world's largest municipalities and is a spectacular city built on hilly terrain.

If the above photo looks a little old, that is because it is. I took this photo in 2009 when Beijing South Railway Station was my destination for my first China high speed rail trip on the Shanghai to Beijing line.

Tianjin is a pleasant city just a short 30 minute HSR trip away from Beijing and with such an arrival point the journey might be worth making just to see this station.

Capital of Hunan province, Changsha is conveniently located on both the Beijing - Guangzhou and Shanghai - Kunming train lines.

The busiest train station in Hebei province, Shijiazhuang Station is also located very close to the center of Shijiazhuang meaning extensive tunneling was required to build the station.

Lanzhou is a city more closely associated with their delicious noodles than being a transportation hub, but with this incredible train station and the city's current construction of a metro system times are changing.

Capital of Anhui province, Hefei is a surprisingly well connected city and sits on both the Beijing-Shanghai and Shanghai-Chengdu lines.

I visited Nanchang with my wife by train in December 2015, and despite some bad weather we really enjoyed our stay.

With trains making the 600+ km trip in just 3 hours, it is a good place to go for a weekend visit from Shanghai.

The most northerly train station in our top 20, Shenyang South Railway Station is located in the capital city of Liaoning province.

Shenzhen is another city with many large train stations, but none are larger than their North station.

I took this photo whilst visiting the city in 2016 but the image doesn't really do justice to just how large the station is.

The spectacular open design of this station really captures the imagination.