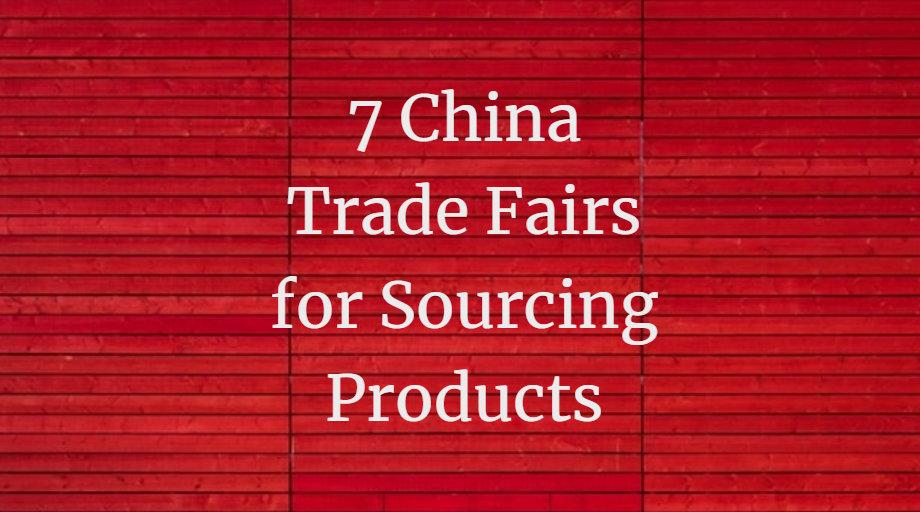 Sourcing from China involves making a lot of decisions, and one of the best choices you can make is to visit one of the huge China trade fairs.

Visiting a trade show helps you to meet a wide range of suppliers, discuss requirements face-to-face and build the beginnings of a succesful business relationship.

China has an incredible number of exhibitions and they vary in size and scope tremendously. Choosing one of these China trade fairs will help to make the most of your time and expense.

This article introduces 7 of China's biggest and best trade fairs which are ideal for sourcing products and finding the right suppliers.

Located across the south of China from Chengdu in the west to Shanghai in the East, these trade fairs offer foreign buyers a huge range of Chinese suppliers who are eagerly looking for overseas customers.

Below we introduce these 7 leading China trade fairs in more detail:

The most famous of all China trade fairs, Canton fair has been running since 1957 and and is the longest and largest foreign trading event in China.

Officially named the China Import and Export Fair, it is held twice per year in the in the city of Guangzhou, which was previously known as Canton.

Up to 2017 it is estimated that over 8 millions overseas buyers have visited the fair from over 200 different countries.

Asia's largest electronics fair, the Hong Kong Electronics Fair is held in May and October each year at the prestigious Hong Kong Convention and Exhibition Centre.

Featuring high-tech exhibitors from all around the world, this fair is the place to go to source products (or gifts) with the latest technological breakthroughs.

Co-sponsored by 9 of China's eastern provinces and cities, the East China Fair is held in China's gateway city of Shanghai.

Taking place in March of each year, the East China Fair is the second largest China trade fair and attracted over 20,000 foreign buyers when held in 2017.

There is a saying in China that no matter where you buy a handicraft from, it always comes from Yiwu.

This may not be entirely true, but it reflects that made-in-Yiwu handicrafts have spread all over the country and indeed the world and it is said that more than 60% of the world’s Christmas decorations are made in Yiwu".

Unlike other China trade fairs in our list, Yiwu Fair is always on and in many ways represents a huge showroom for crafts, stationery, knitwear, toys, ornaments, accessories and much much more.

I last spent a day there when in November 2015 when my brother wanted to check it out, but we only managed to see a small percentage of what was on offer. The place is absolutely humongous!

Given that Shenzhen has more high-tech enterprises than any other Chinese city, it is no surprise to hear that it hosts the China Hi-Tech fair.

Although its claim to be "China's No.1 Technology Show" can be taken with a pinch of salt, there is no shortage of exhibitors and paying a visit represents a great opportunity for sourcing new cutting edge products.

The only fair in our top 7 with multiple locations, the China Electronics Fair is something of a roadshow, visiting Shenzhen in spring, Chengdu in Summer and Shanghai in fall.

Increasingly competing for coverage with Hong Kong's Electronics Fair, this fair is the largest of its type in Mainland China.

One of my team visited the 2013 edition of this China trade fair and it certainly left a good impression, being well run and featuring many interesting products.