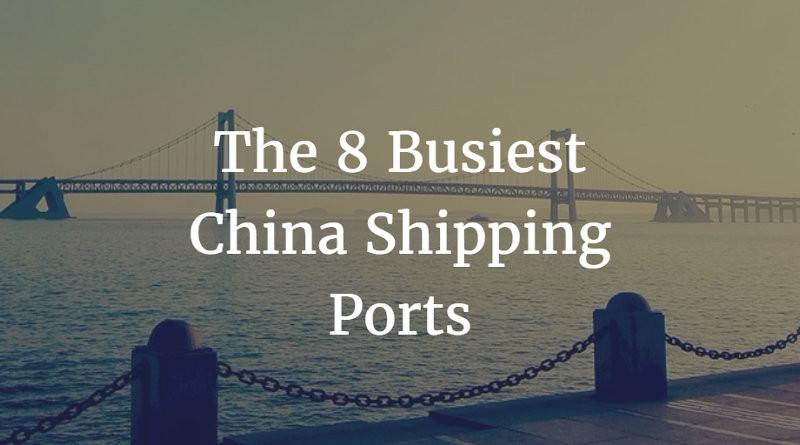 With so many products being made in China it comes as no surprise that China shipping ports are among the busiest in the world.

We've looked up the figures, and in this article present the 8 China shipping ports which handle the most shipping containers.

Incredibly, 8 of the world's 17 busiest ports are in China, and if you include Hong Kong and Taiwan that number rises to 10!

Based on container shipping, the 8 busiest Mainland China shipping ports are each located over a long section of China's east coast stretching from Shenzhen in the South to Dalian in the North, in the provinces most foreign companies are doing business in.

Of these, 7 ports are located in coastal cities, whilst the Port of Guangzhou is further inland at the confluence of 3 major rivers.

There are 6 Chinese Free Trade Zones which overlap with 7 of these 8 shipping ports.

In order, starting with the busiest, these China shipping ports are introduced below:

In 2010 Port of Shanghai overtook Port of Singapore to become the world's busiest container port.

Port of Shanghai is comprised of the gigantic Yangshan Deep-Water port - which is on an island connected to the Mainland by a 32km sea bridge - and a series of ports at the mouths of the Yangtze and Huangpu rivers.

The image above was taken by me on a visit to Yangshan Deep-Water port in 2012 - it wasn't a very clear day, but the port literally stretched to as far as the eye could see!

The name "Port of Shenzhen" is a collective term for the multitude of ports located in Shenzhen City, Guangdong - an area increasingly renowned for the success of its high-tech zones and new industry.

The many ports are often geographically labelled as "East Port" or "West Port" depending on which side of the Kowloon Peninsula they sit.

"West Port" refers to a cluster of busy ports including "Chiwan", "Dachan Bay" & "Shekou", whilst the "East Port" is dominated by Shenzhen's busiest port "Yantian".

Officially called the Port of Ningbo-Zhoushan since the merger of Ningbo and Zhuoshan ports in 2006, Port of Ningbo is located in Zhejiang province, approximately 150km south of Shanghai.

Port of Ningbo's infrastructure include a huge crude oil terminal and ore loading berth which actually contribute to it being the world's busiest port in terms of cargo tonnage, although it handles far fewer shipping containers then Shanghai and Shenzhen.

Famous for their beer production (you may recognize the Tsingtao logo), Qingdao is also a major port city located in Shandong province

Shandong is one of the powerhouses of China's economy with a GDP output only narrowly behind those of Guangdong and Jiangsu provinces.

Located approximately 150km northwest of Hong Kong, Guangzhou is the only place in our list which isn't considered to be a coastal city.

Positioned at the confluence of the Dongjiang, Xijiang and Beijiang rivers, Port of Guangzhou is the main port in the Pearl River Delta region.

I took the photo above in 2016 from a hotel at Nansha port which is in the very south of Guangzhou. The majority of ships going to Port of Guangzhou need to pass under this bridge which is a key piece of road infrastructure linking Foshan and Dongguan.

Located just 150km southeast of Beijing, Tianjin is one of China's 4 municipalities alongside Shanghai, Chongqing and Beijing itself.

The Port of Tianjin made international headlines in 2015 when a series of huge explosions triggered by poor chemical storage measures caused widespread damage and loss of life.

The most northerly of the 8 ports in this list, Port of Dalian is located in Liaoning province, which shares a border with North Korea. It is also China's most northerly ice-free port.

Dalian serves as the major port for the North East region of China and was always destined to be a port city with its prominent location on the tip of the Liaodong peninsula.

Despite being an "ice-free port" I found the city to be bitterly cold during a visit in February 2012!

Located in Fujian province, the beautiful city of Xiamen is a major port which handles a lot of the trade between Mainland China and nearby Taiwan.

Spread out over a large region, Port of Xiamen comprises of 12 different areas - including the port of Zhangzhou since 2010 - featuring both river and deep-water facilities.

Visitors to Xiamen's famous Gulangyu island can take a ferry around the island which passes by many ports and huge container ships.

You may be aware of the common system for grading Chinese cities into tiers, and each of the cities hosting the busiest China shipping ports are highly ranked.

Here is a summary:

In addition to the 8 busiest ports in Mainland China, there are 2 more Chinese ports which handle a very significant amount of cargo.

These are located in Hong Kong and the city of Kaohsiung in Taiwan respectively.

The world's busiest container port as recently as 2004, Port of Hong Kong has in recent years seen its volume of shipping trade fall behind first Singapore, then in more recent year Shanghai and Shenzhen.

Despite this Port of Hong Kong remains an extremely important port for trade with South East Asia and is considered to be the gateway to Mainland China.

There are 9 container terminals at Port of Hong Kong which are operated by 5 shipping companies and plans are afoot to build a tenth.

Taiwan's second city and biggest port, Kaohsiung is located in the southwest of the island.

Handling over 10 million TEU per year, Port of Kaohsiung would rank just above Port of Dalian if included in the main list.

The image above was taken from the top of Kaohsiung's tallest building, the 85 Sky Tower, during my visit in 2011.