6 Asia Business Airports That Get You Nearer Downtown 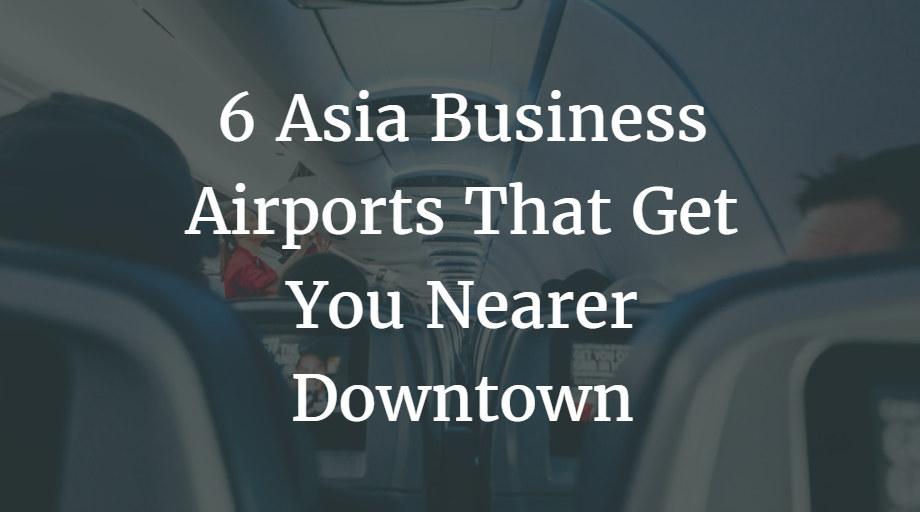 6 Asia Business Airports That Get You Nearer Downtown

Read how business travelers are saving time by using Asia business airports to get them closer to downtown.

But often these new airports are far from downtown making them difficult to reach during rush hour. Happily, the rise of Asia business airports is offering new alternatives.

What are Asia Business Airports?

There is no official definition and the idea for this article came from my personal experiences of frequently flying around Asia as part of my duties as a quality auditor.

Essentially I consider an Asia business airport to be an alternative, smaller second airport which is located closer to downtown than an Asian city's more well-known main airport.

Whilst researching for this article I noticed that these Asia business airports all share most of these features:

Which Cities Have Asia Business Airports?

These alternative airports are all located in large Asian cities, because usually only these cities have more than one airport.

At the heart of these Asia business airports is a network of flights operating between the second airports in Shanghai (Hongqiao), Seoul (Gimpo), Taipei (Songshan) and Tokyo (Haneda).

Taking flights between these second airports can reduce your journey time by many hours as you save time on both departure and arrival.

Although I consider these four airports to be the prime examples, there are some other Asia business airports which I think are worth mentioning.

Although they only serve domestic destinations, Beijing's Nanyuan airport is a great example of an alternative airport in China and Halim Perdanakusuma airport in Jakarta has saved me a lot of time flying in Indonesia.

In addition to these 6, this article also mentions in brief a few other airports in Asia which can get you closer to downtown but didn't make the list.

Here are the 6 Asia business airports which I have used to get closer to downtown and save time.

Visitors to Shanghai can save themselves the long trip out to Pudong airport by flying from the Hongqiao transport hub, which as well as being an airport is also one of China's largest train stations.

There are a small number of international flights operating from terminal 1 and it's compact size means check-in and passing immigration is much faster than at Pudong.

One advantage of flying into Songshan airport is that you get fantastic views of Taipei, as the airport is very much inside the city.

With Taipei's Neihu metro line stopping directly at the airport, getting to your downtown hotel or office can literally be just a few stops away.

Songshan airport flies to many destinations in mainland China as well as Tokyo and Seoul and can easily reduce your journey time by 2 hours compared to the trip out to Taoyuan.

The most impressive of the Asia business airports, Haneda has in recent years greatly expanded its range of international destinations, since the opening of a dedicated international terminal in 2010.

Both of Seoul's airports are to the west of downtown but Gimpo airport is significantly closer.

From Seoul Station there is a metro line which stops at both airports as it travels away from the city. The journey to Gimpo is 4 stops and takes 23 minutes, whilst the trip to Incheon is 11 stops and takes 59.

As a small airport, Gimpo is able to process passengers much faster. Although I certainly wouldn't recommend doing this, I once arrived at the airport for a flight just 20 minutes before take off and still managed to get on-board.

Although scheduled for closure in late 2018, Beijing Nanyuan airport is a very handy option if you are travelling domestic to or from Beijing, with China United Airlines serving over 50 mainland cities.

Unlike Capital airport, which is located in the north, Nanyuan is just to the south of the city. Despite poor transport links, if you need to get downtown quick, a taxi from Nanyuan is usually a time saver.

Having previously suffered a 3 hour taxi ride from the industrial area of Bekasi to Soekarno-Hatta airport I was thrilled to learn of the emergence of Halim Perdanakusuma airport as a second airport for Jakarta.

Although only domestic destinations are served, and the airport is very compact, flying from Halim is a great time saver and only 12km from downtown.

Current advanced plans to build an express rail link connecting Jakarta's downtown to the two airports indicates that Halim Perdanakusuma will likely continue to be developed as a business airport.

Here are some other Asian airports which almost made the list.

At 28km from downtown it is 4km closer to the city center than Bangkok's main airport - Suvarnabhumi.

However, Don Mueang has in recent years turned into a low-cost carrier hub so can't really be considered as a "business airport". Further, it's poor transport links mean getting to downtown would in most cases take longer.

My visits to Osaka have always seen me fly in or out of Kansai airport, or take the fantastic Shinkansen train, so I've never made it to Itami airport before.

Exclusively serving domestic destinations, Itami's most popular flights are those serving Haneda airport in Tokyo. Transport to downtown is via Osaka's monorail.

Being 36km closer to downtown than Kuala Lumpur International airport, Subang airport is a good alternative for domestic flights in Malaysia and for flights to Singapore.

Do you know of any other Asia business airports? Get in touch, we'd love to hear from you!