Is That a Hong Kong Company or a Mainland China Company? 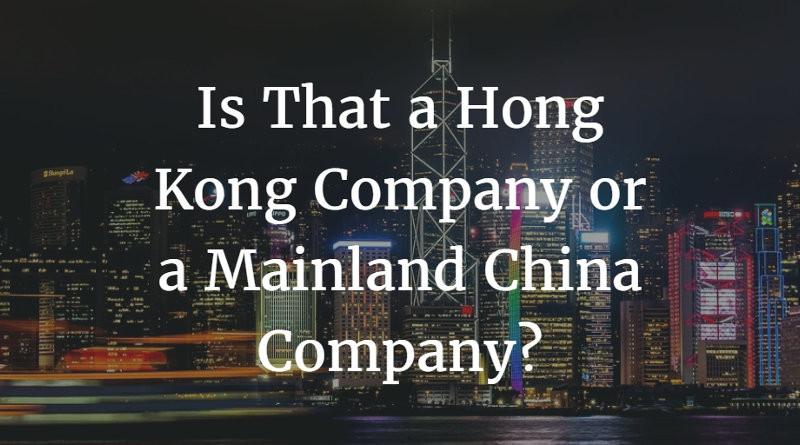 Is That a Hong Kong Company or a Mainland China Company?

Here at China Checkup, we frequently encounter two issues surrounding the difference between a Hong Kong company and a mainland China company:

We thought it would be useful to take a closer look at these issues and make the situation as clear as possible for those doing business in Hong Kong and China.

Many people doing business with Chinese companies may not realise that despite being one country, Hong Kong and the Chinese mainland are actually very separate politically and economically.

There are historical issues which we won’t go into here, but suffice to say that the central Chinese government acts with the famous “One Country, Two Systems” approach when it comes to Hong Kong. The main point that we’re interested in here is that the business registration systems for a Hong Kong company and a Mainland China company are entirely separate – as separate as those of different countries, in fact.

In Hong Kong, companies are registered by The Companies Registry and issued a Hong Kong certificate of incorporation, whilst in Mainland China registration is made by the AIC and a China business license issued.

Some people may be surprised to learn that the registration system on the mainland is actually more stringent and difficult than the one in Hong Kong. The Hong Kong business environment is generally more open, and Hong Kong is also much more mature as a capitalist economy. In almost all cases it is easier to get a company registered in Hong Kong than it is on the mainland, and less upfront capital is required to do so.

Finally, a Hong Kong company can officially register with an English name alone, whereas a Chinese name is required on the mainland (an English name may be registered along with it, but generally isn’t).

This means that in terms of checking out a Chinese company’s official registration record in order to verify it, Hong Kong and the mainland are totally different. For practical purposes as far as verification is concerned, they may as well be different countries.

A secondary issue surrounding the separation of Hong Kong and the mainland is that it’s quite common for a Hong Kong company to register a secondary company on the mainland, or vice-versa. The ‘main’ company is located in one location and operates from there, but also operates a company registered in the other. There is of course a huge range of scenarios in which this might occur, some legitimate and some dubious:

The above is just a selection of examples to give you a sense of what goes on.

Generally speaking these dual registrations occur with the mainland registration taking place in Shenzhen or Guangdong province, in order to be geographically close to Hong Kong.

This certainly doesn’t mean that all Shenzhen, Guangdong or Hong Kong registrations should be viewed with suspicion. However, it can be useful to be aware of these possibilities.

Ease of Doing Business in Hong Kong and Mainland China

Data from the World Bank on Hong Kong and on China is very revealing about the differences in doing business in these 2 jurisdictions.

The World Bank assesses countries for the Ease of Doing Business and presents an overall ranking, plus individual rankings for 10 different criteria.

Their 2015 rankings saw Hong Kong come in 3rd place worldwide, whilst China was back in 90th place. Here is a comparison of how they scored:

Also available on the World Bank’s website is information about the time taken to set up a new company in Hong Kong and China.

Setting up a company in Hong Kong could hardly be simpler, it takes 2.5 days and there are only 3 procedures to pass through.

Contrast that with Shanghai, China where setting up a company takes 30 days, with 11 procedures to undertake – and that’s in Shanghai, the country’s financial capital, it would certainly be a more difficult process in many parts of the country.