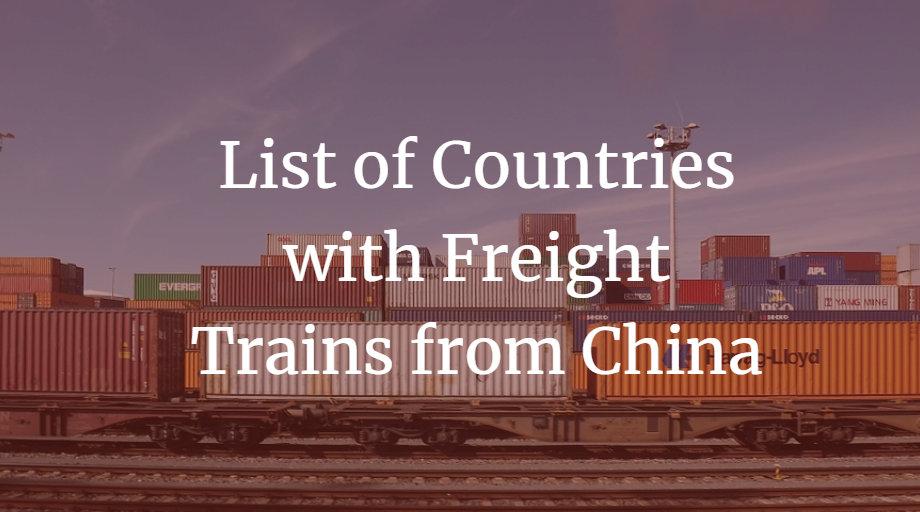 Do Freight Trains from China go to your Country?

If you live anywhere in Europe, Central Asia or somewhere in between, the answer is more than likely yes!

Now they are making huge strides in expanding their rail freight network internationally under their much vaunted 'One Road, One Belt' project.

Thanks to new infrastructure, international cooperation and generous Chinese subsidies, the railway container traffic from China to Europe increased almost tenfold from 25,000 TEU (Twenty-Foot Equivalent Unit) in 2014 to 240,000 TEU in 2017.

So Chinese Trains go all the way to Europe?

Well actually, no. As this article in RailJournal.com explains:

"There are no freight trains from China to Europe," was the somewhat surprising opening statement by Mr Ewe Leuschner, senior vice-president, business development Eurasia, with DB Cargo. He went on to explain that there are three independent groups of rail freight services: China on standard gauge, the 1520mm-gauge network covering Mongolia, Kazakhstan, Russia and parts of Eastern Europe, and standard gauge in the rest of Europe.

China is the driving force behind putting in place the infrastructure improvements and international agreements that are opening up these rail routes. And, significantly, they are providing the subsidies that encourage companies to use them.

However the freight itself is transferred between different trains on different lines at different sections of its journey west.

Why is China Doing This?

China sees rail as a viable alternative to costly air freight and slow sea freight, for transporting their wares to markets in Asia and Europe.

By reinventing the ancient Silk Road as a modern overland rail cargo route China plans to develop inland parts of the country located far from the coastal sea ports. Included in this is the establishment of many inland free trade zones.

These efforts are already starting to have a big effect, especially for high tech manufacturers in Chengdu, Chongqing and Zhengzhou who can now get their products to Europe in ~15 days by rail rather than ~45 days by sea.

Map of Countries with Freight Trains from China

The below map identifies countries where China freight trains either travel to or stop at en route to their destination.

Countries that have Received Freight Trains from China

We have identified that each of the below countries have received freight trains from China in recent years.

Note that not all countries have regular scheduled services, but at least have a documented case of receiving a freight train from China.

The following table identifies countries with international freight train services from China, starting with the closest - North Korea - and concluding with the country furthest away, Spain.

The main freight route currently under construction is the ambitious project to link China to Singapore through the Malay Peninsula.

Known as the Kunming-Singapore railway, if and when completed, this project will lead to freight trains from China also heading to each of the following South East Asia countries: