Would You Spot These Warning Signs on a Chinese Scam Website? 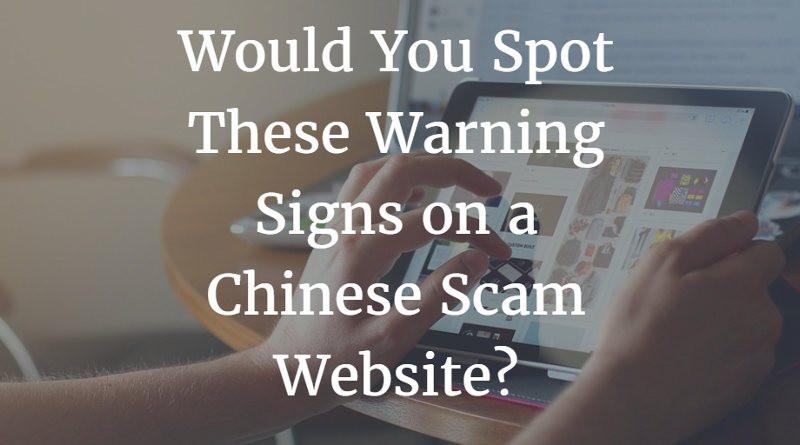 Would You Spot These Warning Signs on a Chinese Scam Website?

Nearly everyday we are asked to investigate a Chinese scam website, and we’ve noticed some common and easy-to-spot trends in the way they’re set up. We’ve made a list of such warning signs here, as they can often be useful first-glance indicators that something is amiss.

The easiest and quickest sign to spot is a lack of Chinese writing being used on the website. Even if a Chinese company has a site for English-language visitors, genuine companies will usually have some amount of Chinese on the page.

Common places where Chinese is likely to be used include names, addresses and especially the official name of the company (see below). The company’s logo or branding is also likely to include Chinese characters, or artwork based on them.

If none of these seem to present, most genuine Chinese companies will also have a Chinese-language version of their website, or a separate Chinese-language website. There are likely to be obvious links between the two.

Of course, the lack of all of these can never confirm that a website is a scam. However, in our experience, a lack of Chinese language on the website of a Chinese company tends to indicate that something is amiss.

The most crucial Chinese-language item to look for on the site of a genuine Chinese company is their official company name. All companies in China must have an officially registered name, and this name must be in Chinese.

A genuine Chinese company is very likely to display their official name on their website to reassure visitors who know how important it is. The name will often be displayed in Chinese characters, or sometimes in pinyin romanisation. It can usually be found at the bottom of every page.

Along with an official Chinese name, real Chinese companies also have a business registration number. This is likely to be displayed at the bottom of the page with the company name.

Again, this isn’t a certain way to determine if a website is a Chinese scam. It’s perfectly possible for legitimate Chinese companies to not display their Chinese name or registration number. It can be a first-glance reason to be cautious, though.

4. No Physical Address Given

Companies often display their physical address to reassure potential clients that they really exist and aren’t going to disappear any time soon. We do this, and many legitimate Chinese companies are no exception.

A company’s official address will often be displayed along with their name and registration number. If the address is written in Chinese, that’s an especially good sign.

Be aware, though, that a Chinese scam website often displays a fake addresses in English. They often tend to choose the addresses of large, legitimate companies, particularly in areas densely populated with many businesses.

Googling these addresses can often reveal how plausible it is that the company in question actually exists there. A small-scale Chinese supplier, for example, is unlikely to be sharing office space with a huge, well-known corporation, for example. An even better result of Googling the address is to discover that it doesn’t exist at all.

5. No Landline Phone Number Given

To scammers, on the other hand, a landline phone number is much less attractive as it is harder to get use of one without registering names and identifying details.

Whilst this is a list of first-glance warning signs, we’ll point out here that actually dialling the phone number shown on a potential Chinese scam website is a very easy check to make. Try not give any indication of who you are or which company you were expecting to answer on the other end.

In our experience, a surprisingly large proportion of scammers will foul this up and either not answer at all, or make it obvious in the call that they are not a professional employee of a real company. Many do not even realise that the call is from a potential ‘client’.

For example, the phone number area code for Shanghai is 21, yet we have seen scammers giving phone numbers with this area code but addresses in Beijing. This doesn’t conclusively prove anything, but it should certainly be flagged as odd.

7. Claims to Manufacture a Huge Range of Different Products

It’s quite common for a Chinese scam website to claim that they themselves manufacture a massive range of quite different product categories. This is particularly true for electronic products, which such websites are fond of claiming to sell.

For example, a genuine supplier tends to focus on quite a narrow category of products. This makes sense because there is specialist machinery and experience that needs to be accumulated to produce each category effectively. Only very major, large-scale suppliers can produce a huge range of products themselves.

Scammers, though, will often claim to be a company producing laptops, GPS systems, mobile phones, watches, cameras and so on. A trading company might source all of these products, but it’s unlikely that a single supplier would genuinely produce them all and sell them directly to consumers or small businesses.

This warning sign is more subjective but is a common Chinese scam website feature from what we have seen. Scammers tend to use generic template website designs that all look somewhat similar. These templates are cheap to buy or free, and let scammers create what they believe are legitimate-looking websites in a matter of minutes or hours.

These templates often include generic stock photos of smiling staff, particularly of women wearing headsets. There is often similar, repetitive text on several of the pages, and a limited number of pages overall. Once you’ve seen a few such examples and get a feel for this type of design, spotting a Chinese scam website becomes easier.

Real companies, on the other hand, tend to include more photos of their actual location. This is especially true of factories. These photos are often quite obviously photoshopped, but we see them more often on a genuine supplier’s website than on a Chinese scam website.

9. English Name is Generic or Similar to a Well-Known Brand

The English names of Chinese companies are usually arbitrarily chosen and not officially registered in any way (usually only the Chinese name is official). However, most legitimate companies still choose English names that are unique and plausible.

It’s a good sign if the English name seems to be a direct translation of the Chinese name, including the location (which is required). If the two names seem totally unrelated in any way, this should raise eyebrows as it’s an unusual choice for a Chinese company to make.

Scammers tend to choose shorter names, and often go for very generic ones without any location or product category qualifiers. Names like ‘Such-and-such Technology’ or ‘Something Solutions’ would be unusual choices for legitimate Chinese companies, but may be seen on the websites of Chinese scammers.

It bears repeating that none of these are hard-and-fast rules, but merely indicators. To reliably establish whether a Chinese company is real or not requires initial background research followed up with more extensive checks and finally on-site visits.

Also, real Chinese companies are unlikely to blatantly use the names of well-known brands. This would be likely to lead to legal problems down the road, especially if they have misappropriated the name of another Chinese company.

Scammers, being outside the law in the first place, do not have this pressure and may attempt to leverage a well-known brand or identity in the company name they advertise.

If you’re like us then you find these stolen names less trustworthy, but apparently they work, as we frequently come across a Chinese scam website that uses bits and pieces of famous brands in their name.

Do you agree with these warning signs? What else would suggest a website is a Chinese scam?

An Easier Way to Avoid a Scam