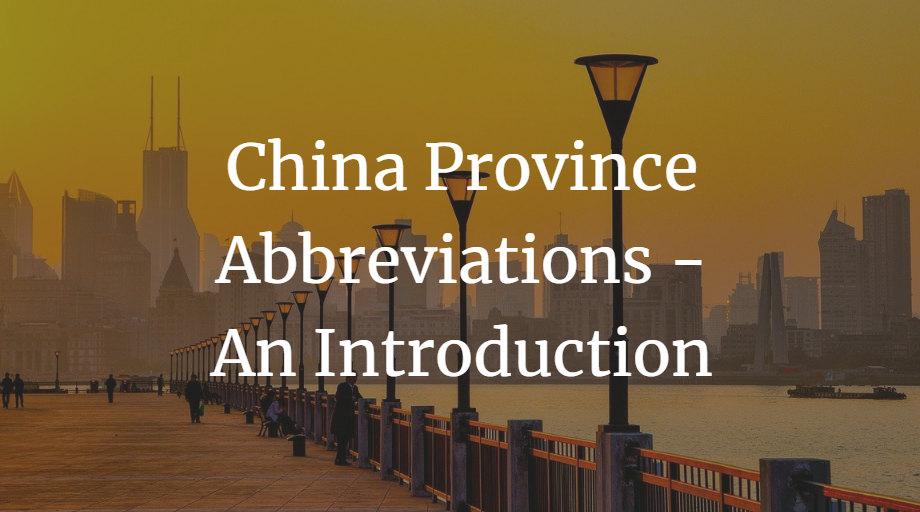 Why are China Province Abbreviations Needed?

Famously, the United States has a 2 letter abbreviation for each of her 50 states - think "CA" for California, "NY" for New York and "TX" for Texas.

Whilst China can't quite match America's number of states, there are still 34 different provinces in China, and having an abbreviation for each certainly makes a wide range of tasks easier.

Although one method of China province abbreviation closely resembles the 2-letter system used in the United States, the most commonly used method (at least within China itself) is to have a single Chinese character to represent each province.

Having a character specific to each province helps to provide concise information, whilst saving space on many types of documents and media.

There are two main methods for abbreviating Chinese province names:

This table identifies these abbreviations for each province of China:

More details on each abbreviation method below:

These codes are based on Chinese standard GB/T 2260-2007, as used in the China-specific section of international standard ISO 3166-2.

Prior to 2017, this ISO standard used 2-digit numeric codes (which we didn't consider to be abbreviations) rather than 2-letter codes, so the change is quite recent.

We sometimes find these abbreviations used in the URLs of Chinese government websites that are divided into different province sections, for example the various province-level company search websites.

If you are working on geocoding or working with some datasets you may encounter these codes, but generally speaking it is quite rare to see these two-letter abbreviations being used.

They are by far the most commonly seen type of China province abbreviation within the Chinese language world in general.

Indeed, just walking down any street in mainland China you can easily see this type of abbreviation being utilized, as the single character abbreviations are used on vehicle registration plates to indicate the province of registration.

Another good example of their usage is on the homepage of the People's Daily (the largest newspaper in China). Here they use each the single character abbreviations to give quick access to news from that province:

Actually you can also see province character abbreviations being used on nearly all Chinese websites if you scroll down to the footer.

In China, all websites operating with their own domain name must have ICP registration, and display their ICP registration details in their footer. As this system is managed at a provincial level, the registration number includes the province abbreviation character.

The province character is always at the start, so using this method we can see that Adidas' China website (adidas.com.cn) is registered in Jiangsu province:

Another example we have seen of their usage is the numbering of China law court records.

The characters are also frequently used just in general Chinese language, to indicate that something originates from a particular province.

For example, seven of China's "8 Great Cuisines" include a province abbreviation in their widely-used Chinese name.

Eagle-eyed readers might have noticed that many of the province names we use in the previous table are actually abbreviations themselves!

This is partly because we have used shortened versions of their official names.

But it is also because we have used the word 'province' rather loosely. Technically-speaking the term "provincial-level administrative division" would be more appropriate.

There are in fact only 23 official provinces in China (22 if you don't include the independently-governed island of Taiwan).

This table identifies the official name of each China 'province' in Simplified Chinese, Pinyin and English:

As you can see from the pinyin above, the names for Hong Kong (Xiānggǎng), Inner Mongolia (Nèi Měnggǔ), Macau (Àomén) and Tibet (Xīzàng) are different in Mandarin Chinese to English.