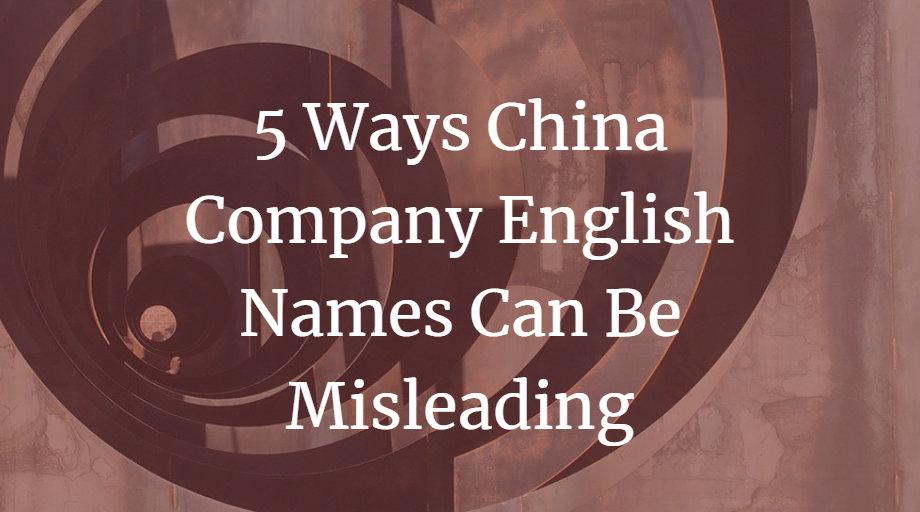 We often come across China company English names which we feel are misleading.

They are misleading for a number of reasons - some accidental, some deliberate, some cynical - but the root cause is that companies from Mainland China are registered in the Chinese language, not in English.

Here we give some background on China company English names and introduce the 5 ways in which we find they can be misleading.

What are China Company English Names?

The answer to this question isn't as simple as you'd imagine. This is because when companies from China are registered, they are done so entirely in the Chinese language.

Most Chinese companies actually don't have a need for an English name, but for the ones that deal with foreign companies, choosing an English name becomes a necessity in order to communicate and accept overseas payments.

There are many methods through which China company English names are chosen and in the majority of cases companies simply use a translation of their official Chinese company name into English.

Why would a Chinese Company Choose a Different English Name?

In China, official company names (in Chinese) are actually quite descriptive - they tell you where the company is registered, their key industry and their form of incorporation.

Because these official company names must be used in most business situations in China there is little room for ambiguity. Company names must follow a set structure which already reveal much information.

For example, we can easily determine that the Chinese company "河南省豫新反光材料有限公司" is:

When a Chinese company is dealing overseas on the other hand, they find they have more freedom to define their company's identity in English. This can lead to China company English names being quite different from their official Chinese ones.

We find there are two main reasons why Chinese companies choose an English name which isn't a direct translation:

a) Chinese is More Concise Than English

Imagine if Apple Inc.'s official name was "California State Apple Consumer Electronics Inc." - it doesn't exactly roll off the tongue does it!

If American companies had to follow China's company naming convention this could well be their official name.

When Chinese company names are translated into English they can often sound quite clumsy and be excessively long, so Chinese companies often chose a shortened English name to sound better and for convenience. Having a shorter name is just easier - the name takes up less space on business cards, brochures, product decals etc!

For a wide variety of reasons (including cultural and commercial factors) many Chinese companies feel that they are better off making adjustments from the direct translation of their company's English name.

For example the Chinese electronics company Xiaomi (小米) probably chose not to translate their name into English because it would be "Little Rice".

Similarly, many Chinese consulting companies who are registered with the industry component "企业咨询管理" (Enterprise Management Consulting) simply abbreviate this to "Consulting".

Apart from the reasons explained above, there is regrettably another reason why Chinese companies choose an English business name which doesn't match their Chinese name - this is to mislead clients or disguise the nature of their business.

Over the years we have come across examples of each of the following dubious English company naming practices:

We are often asked to verify companies whose name starts with "Shanghai", "Beijing" or "Shandong" and give a China business address but find they are not registered here.

These companies are often incorporated in Hong Kong or another offshore jurisdiction but do not reveal this to their clients.

In many cases the offshore entity even holds an offshore bank account at a Mainland China bank to further disguise who the money is actually going to.

The fact that payment is being made to an offshore entity rather than a company in China presents many difficult questions in regards to enforcing contracts and when things go wrong.

Many companies sourcing from China want to work directly with the factory that will manufacture their goods and are at pains to avoid being stuck working with a middle man.

Unfortunately we find many instances where trading companies (who can be easily identified from simply their official Chinese name) simply omit this detail when advertising products on the many sourcing websites.

Finding out whether a company engages in manufacturing is usually as simple as reviewing the business scope of their China company registration.

Whether deliberate or not, we have seen many examples of Chinese sole traders incorrectly including the ending "Co., Ltd." on their English names.

In many cases this might simply be due to a poor translation or that they don't have a good understanding of the different types of company registration in China.

Either way this method of naming is clearly incorrect and gives a misleading impression of the nature of the company.

This typically happens when the owner of two or more independently-registered Chinese companies refers to his/her companies as being "a group".

In China, official group companies can be registered with the name "集团有限公司" (Group Co., Ltd.). However in many cases we find that apparent "group" entities aren't officially related - there is no holding company and one company isn't a subsidiary of the other.

5. Be Unrelated to Official Chinese Name

Many Chinese companies choose an English name which seemingly has no resemblance to their official Chinese name.

There is nothing to stop them doing this and it is actually quite a common phenomenon. Here are some well-known examples of this:

Whilst some of these name changes are understandable for marketing purposes, especially for large established brands, in many cases it feels very difficult to justify.

Having an unrelated English company name can lead to much confusion with overseas clients as well as presenting difficulties when it comes to verification.