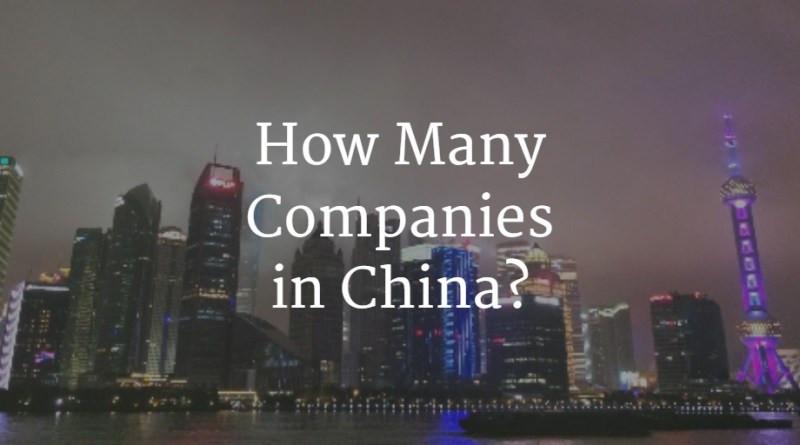 Just how many companies in China are there exactly? We’ve been asked this question a few times and decided to go and find out.

Given that China has a population of over 1.3 billion we knew that it would be a large number. Happily, answering the question proved to be easier than we thought.

According to a report by China’s Administration for Industry and Commerce (AIC) released on 14 January 2016, the number of companies in China is 77,469,000.

Which Companies Does This Figure Include?

Officially all companies in China must register with the AIC - from small noodle restaurants to monolithic state owned enterprises.

There are many different forms of company registration in China and it is important to understand that this figure does include sole traders (个体户 Pinyin: Gètǐhù).

We are only counting companies registered in Mainland China – Hong Kong and Taiwan have separate company registration systems.

Number of Companies in China is Increasing, Fast!

Honestly, the fact that China has ~77 million companies didn’t surprise us.

The figures that really caught our attention were those about the rising number of companies in China, which is growing at a rate of 11.8% per year.

On average during 2015 there has been an astonishing 12,000 new companies being registered each day in China. This equates to over 4 million new companies per year!

To put that number into perspective, this is more than the entire number of companies registered in the United Kingdom, which currently stands at ~3.6 million.

A Large Number of Small Enterprises

The AIC defines small businesses as those with a registered capital of less than 20 million yuan.

Of the ~12,000 companies which are currently being registered on a daily basis this year, it was reported that 96.62% fit this criteria.

How Many Foreign Companies in China?

According to the this report by the Ministry of Commerce, there were 836,595 companies with foreign direct investment registered in Mainland China by the end of 2015. This includes WFOEs and Joint Ventures.

How Many Companies in Hong Kong?

It would be a mistake to assume that all companies with a Chinese name are registered in Mainland China.

The company registration systems for Mainland China and Hong Kong are entirely separate so the figure above doesn’t include Hong Kong-registered companies.

Statistics for companies registered in Hong Kong can be easily viewed in English on the Hong Kong Companies Registry website.

Companies in Taiwan are registered by Taiwan’s Department of Commerce and numbered 675,129 when we wrote this article.

You can actually check the number of companies and the number of trademarks registered in real time on the header of the departments Chinese-language homepage.