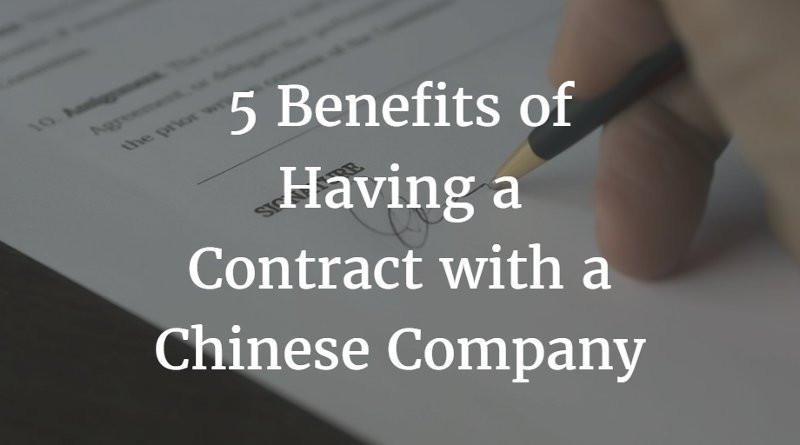 There are certain things that are essential in any business relationship, including background checks and contracts. We regularly write here about background checks, so it’s high time that contracts got a little attention.

1. A Contract with a Chinese Company Ensures Clarity for Both Sides

A lot of problems in business deals involving Chinese companies are not caused by malice or incompetence on either side, but by poor communication. A particular feature of the deal may seem so obvious to one side that they neglect to include it specifically in the terms, yet this omission is seen by the other side as permission to handle that issue however they see fit. Clear contracts agreed to by both sides prevent this kind of issue. Everyone either agrees to the contract or they don’t, and any misunderstandings should be highlighted by the process.

One mistake that can prevent foreign companies from benefiting from China contracts this way is having contracts in English rather than in Chinese. For obvious reasons, a contract in English will have far less impact on clarity than one in Chinese. Having contracts professionally translated into Chinese by a third-party translator ensures that both sides are clear, and also leaves the potential for legal action open should that need arise (see below).

Another consideration is ensuring that it is clear who the parties in the contract are. This may seem obvious but it is common for China manufacturers to also have a separate trading company that handles foreign trade. Ensuring the manufacturer is also specified in the contract is good practice.

2. A Contract Demonstrates Your Side’s Commitment

Appearing uninterested in negotiating a clear contract with a Chinese company may suggest to them that you either don’t take the deal seriously, or that you don’t take the quality or outcome of the deal seriously. In either case, this is not a good basis for a business relationship with any company. Inversely, appearing to take the contract and terms seriously sends a clear message that you won’t accept substandard work in the relationship. This impression can be enhanced by making it clear early on that you will be making background checks, performing audits and carrying out quality inspections. Taking this attitude has the added benefit of helping to ward off potential fraudsters by making it clear you won’t be an easy victim.

It’s wise to include clear and specific compensation terms in the contract to cover potential delays or quality issues. Delaying orders and cutting corners on quality are always temptations for a Chinese manufacturer, especially if they can’t be sure that the buyer is fully committed to the deal and relationship. Specific penalties for these give a contract much more power to prevent problems before they even occur, rather than just being a tool for dealing with problems after they’ve happened. Further, specific wording about contract violations can greatly increase the chance of legal action being successful if that becomes necessary in the future.

4. A Contract Provides Backup in Disputes

Even before legal action, a clear contract can give your side much more leeway in disputes should the other side break the terms. Verbal or even non-contractual written agreements will count for very little, especially with Chinese companies who have become well-practised in dealing with what they see as uncertain deals with foreign companies. They are good at getting the deal, at the same time anticipating a difficult conversation with you later when they inevitably deviate from what was agreed to. Such deviation might be almost impossible to dispute if the other side knows you’re already committed, but having the terms formally agreed to beforehand may give you some leeway in such a dispute.

5. A Contract with a Chinese Company Allows Legal Action

If disputes with a company in China over the contract are not fruitful, ultimately it may be appropriate to take legal action. If there is no contract, then the chances of successful legal action are likely to be zero. Further, it’s certainly not the case that any contract will do. Contracts for business in China also need to follow some specific requirements (see below). However, the key point here that many people doing business with Chinese companies overlook is that contracts in China do have power and are worth implementing carefully.

China is actually ranked 19th in the world for contract enforcement, above Switzerland, Japan and the United Kingdom, for example. That means that if you have a legitimate contract with a Chinese company and they break its terms, your prospects for legal action are actually quite good. This is contrary to many people’s apparent image of the Chinese business world as one where the law counts for little. What’s important in these cases is that the contract is actually a useful one in the Chinese business environment, which has been covered here by China Law Blog.