Why Do So Many Chinese Website Names Contain Numbers? 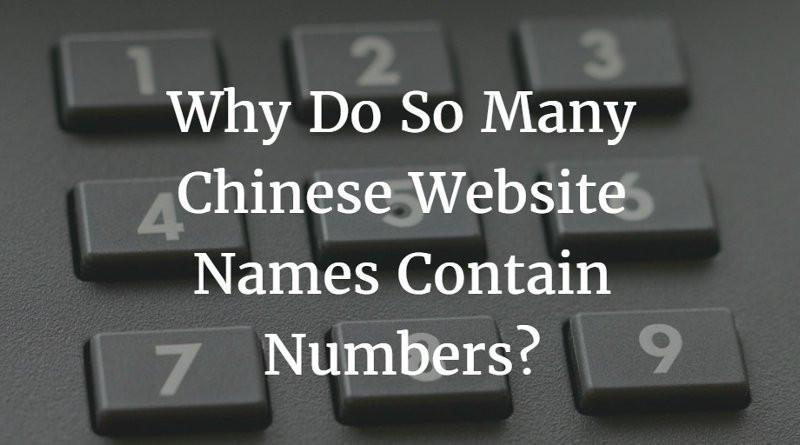 Why Do So Many Chinese Website Names Contain Numbers?

If you are looking at Chinese companies online, you may notice that it’s quite common for Chinese website names to include digits. This is much less common with the names of English-language websites, so what’s going on?

There are a couple of reasons for this. Firstly, numbers are often easier for Chinese people to remember than Latin letters. Secondly, numbers often have extra meanings in Chinese.

Number-Name Websites are Easy to Remember

The numerals 0123456789 are used in China much as they are elsewhere in the world, and people learn them from a young age. This means they are very familiar to Chinese people and not seen as something foreign.

Latin letters, on the other hand, are generally much less familiar to many Chinese people. This may be less true for younger generations who study the Latin alphabet (thanks to Pinyin) from an early age, but in general Chinese people have less reason to use Latin letters day-to-day than they do with Arabic numerals.

Numbers Have Meanings in Chinese

The second reason number domain names are popular in China has to do with the huge number of homophones in the Chinese language. That is, the large amount of words that sound alike.

Because there’s quite a limited amount of syllables in Chinese languages, many words end up sounding similar or identical. Numbers are no exception.

Because all numbers in Chinese sound similar to other words, it’s difficult to avoid certain associations growing between numbers and the words they sound like. This can also be put to use by intentionally choosing numbers to mimic the sounds of other words.

Here are some common associations between numbers and similar-sounding words in Chinese:

You can read more about homophone numbers here.

The effects described above would have been used when the below Chinese website names were created:

How This Affects Business in China

Being aware of this issue can be helpful when dealing with companies in China that may make use of numbers in their website domain, email address and other materials. People from Western countries may associate use of numbers in these as cheap or think it means that the most desirable version was already taken. In China, though, that’s usually not the case.

It can also be helpful to be aware of these associations and how they may affect Chinese people’s perceptions of numbers used in your own business and naming schemes.