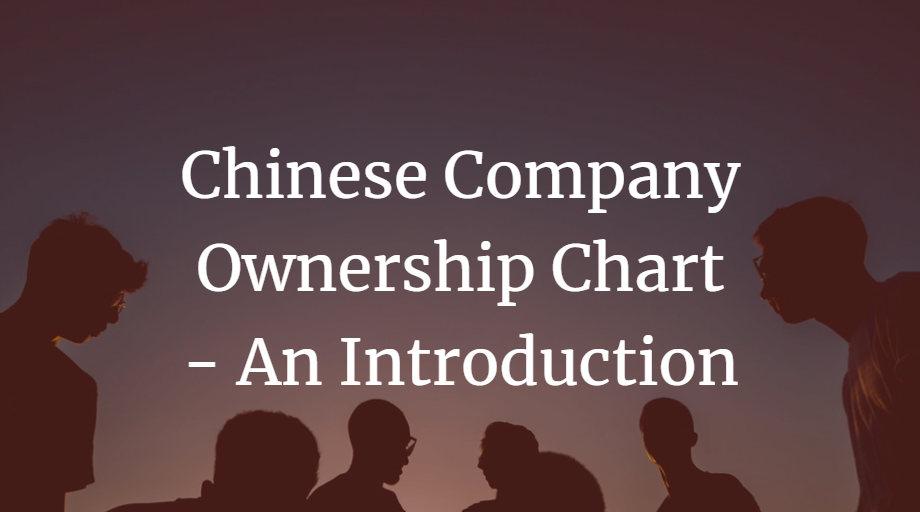 This article has been written to introduce our Chinese Company Ownership Charts - a popular element of our company verification reports.

Introduced as a feature in our "Pro" & "Full Scope" company verification reports since October 2017, these charts help clients to better comprehend a Chinese company's shareholding structure by providing a visualization of available ownership data.

Understanding whether you are dealing with a solely-owned business or a complex array of stakeholders can be vital information and is easily identified with our Chinese company ownership charts.

What are Chinese Company Ownership Charts?

In each of our Chinese company verification reports we include a table listing the company's direct shareholders. For companies with a simple ownership structure this can be sufficient to give a full understanding.

But what about companies with corporate shareholders? Who owns those companies? Who are the ultimate beneficial owners?

Our ownership charts were developed to address these questions by providing a visualization of the company's ownership structure with multiple degrees of shareholders - allowing clients to dig deeper and get a more complete picture.

As the saying goes, a picture is worth a thousand words, so we'll look at some examples.

To understand how they work though, it is a good idea to first understand our chart key:

Our charts often need to include a multitude of information so we have devised a numbering system to identify shareholder levels and a color scheme to identify the different types of shareholders.

You can see what the different colors represent in the key below:

As is shown in this example, many Chinese companies, particularly smaller ones, are simply owned by an individual or a group of individuals.

In such cases there are only "1st-degree shareholders" and the company's ownership chart is very straight forward.

For this example the ownership structure is already getting quite complex. This example company has four 1st-degree shareholders, one of whom is a government body.

Included in the 2nd-degree shareholders are two companies registered outside Mainland China - one from Hong Kong, who we can get ownership information for, and one registered offshore, who we can't.

Each of the 3rd-degree shareholders are individuals. To calculate an individual's overall ownership of the subject company just multiply the percentages. E.g. "Zhen Xiansheng" owns 6% (50% * 40% * 30%) of "Beijing Yangpin Baogao Co., Ltd.".

I'm not going to try to explain this example ownership chart as it would take too long and hopefully our system will make sense to you by now.

What are "Degrees of Ownership"?

When a Chinese company is wholly or partly owned by another company the question raised is "well, who owns that company?".

We quickly realized that trying to explain the different levels of ownership is very complicated so have devised this concept of "Degrees of Ownership".

Occasionally we come across Chinese companies with extremely complicated ownership structures that would could literally take us days to research.

For this reason we limit the degrees of ownership which we guarantee to include in our Chinese company ownership charts. These vary depending on the report ordered:

Which Services Include an Ownership Chart?