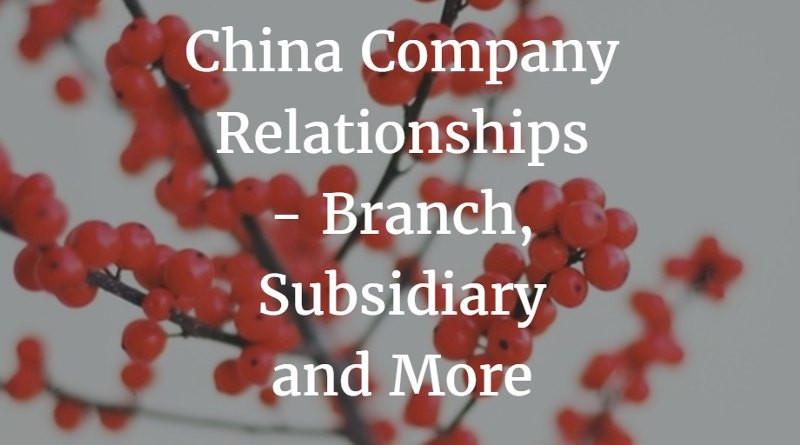 The subject of China company relationships is a recurring theme at China Checkup.

Many clients contact us because they thought they were doing business with Company A, but were then asked to make a payment to Company B.

When doing business in China this whole area can get very confusing, so we thought we’d prepare something of an explanation in this article.

In mainland China there are two main official types of company relationship – branch company and subsidiary. There are marked differences between these two forms as explained below.

If a registered mainland Chinese company chooses to open a Branch Company (分公司), they are then referred to as the Head Company (总公司).

The Branch Company is not considered to be an independent legal entity. It is affiliated to, and must share the name of, the Head Company. This is usually done by adding the text for branch company (分公司) to the end of the head company’s registered name. For example:

A Branch Company doesn’t engage in business activities under their own name and their operations must be covered within the the Head Office’s business scope.

They don’t have a board of directors so their business assets and personnel are under the direct control of the Head Company.

The terms "Branch Company" and "Head Company" are also known and can be interchanged with "Branch Office" and "Head Office" respectively.

When a mainland Chinese company registers a Subsidiary Company (子公司), they are then referred to as the Parent Company (母公司) and become a shareholder in the subsidiary.

The Subsidiary is a separate legal entity with its own unique name and identity. Even if it is fully owned by the Parent Company, there is no requirement for it to have the same or even a similar name.

The Parent Company’s control over its Subsidiary is limited to the influence it can exert as a shareholder, such as appointing and disposing board members.

Where the Parent Company owns 100% of the Subsidiary’s shares, it can exercise complete shareholder control – here the Subsidiary is known as a “Wholly Owned Subsidiary”.

Recently, we had a client who was dealing with a Chinese company that claimed to have many manufacturing sites, but refused to provide any registration records for them, because “they are only branches”.

This was not a valid excuse at all – both subsidiaries and branch offices must be legally registered and have their own business registration license.

China Checkup’s company verification services can be used to verify the details of any Chinese company, including subsidiaries and branch companies.

If you’ve done business much in this part of the world you will be aware that many China company relationships aren’t so clear cut as a branch company or subsidiary arrangement.

Trying to determine the relationships between companies can be quite a challenge as Chinese companies in different circumstances may wish to hide/exaggerate/deny/claim/understate the nature of the relationship.

There is a whole plethora of ways in which China company relationships can be unofficially formed, so here we will just mention some of the more common ones. Some of them are easier to identify whilst others can be more complex.

Be aware of potential conflicts of interest, such as staff members with secret shareholding in your suppliers hidden under the name of their family members. Also that Chinese companies' English names can be misleading.

Two companies could share a common individual shareholder who partly or fully owns both of the companies.

There is no official connection between the two entities but they might work together in the interest of both businesses.

E.g. If the same person owned a tannery and a handbag factory, the tannery would supply the factory with leather.

Two companies are both partly or fully owned by the same corporate shareholder (we should call this one semi-official).

Sometimes different companies within a group may be registered under the names of different family members.

This is quite common and it can be difficult to identify relationships between companies in this way because couples usually have different family names and Chinese names can be shared by literally thousands of people.

Even harder to identify as there is not even an official personal relationship between the parties.

Often the two entities may share common individual shareholder(s) rather than one being a subsidiary of the other.

Increasingly, we are seeing cases of Chinese individuals registering entities in tax havens such as the British Virgin Islands.

Often times foreign businesses find themselves being asked to not directly sign contracts with, or pay money directly to a mainland Chinese factory. Instead, they are asked to deal with companies claimed to be affiliated with them via their trading offices or “partners”, either in the mainland or Hong Kong. What does this mean? Are there any risks involved?

In China a company is not legally permitted to carry out import or export operations without registration with the relevant foreign trade offices.  As such it is not unusual for a Chinese factory to cooperate with a foreign trading company to deal with its import and export issues. In many cases the factory will setup a trading company as a separate legal entity.

The key for foreign companies is to conduct independent verification, confirming the relationship between the two. It is also a good idea to specify the manufacturer’s name in the contract between with the trading company too.

There are also many relationships between two entities where one is registered in mainland China and the other in Hong Kong. You can read more about this topic in this blog.

Although one entity is sometimes the parent company of the other, in most cases there is a less clear relationship between them.

However, it is important to note that Mainland China and Hong Kong operate entirely separate business registration and legal systems.

In most cases, paying a Mainland China company directly is safer (but less convenient) than paying their Hong Kong office. This way, if things go bad, at least you still have the manufacturer to resort to, instead of a shell company with little or no assets.

All of the above terminology is getting a little confusing now, so lets finish with a real life case study of China company relationships.

We had a UK client who found a garment factory in Dongguan (Company A), signed a contract with a separate company in Shenzhen (Company B), and received an invoice asking for payment to another company in Hong Kong (Company C).

Company A’s legal representative and sole shareholder was Mr. X, while both Company B and Company C were registered by Mr Y.

The contact person the client was dealing with explained the relationship as follows:

Company A was said to be focused on OEM production and the domestic market.
Company B was explained to be a Shenzhen trading company setup to develop the factory’s foreign trade business with their own brands.
Company C was further registered by company B in  Hong Kong (SAR) for the sake of “further marketing the company’s brand internationally”.