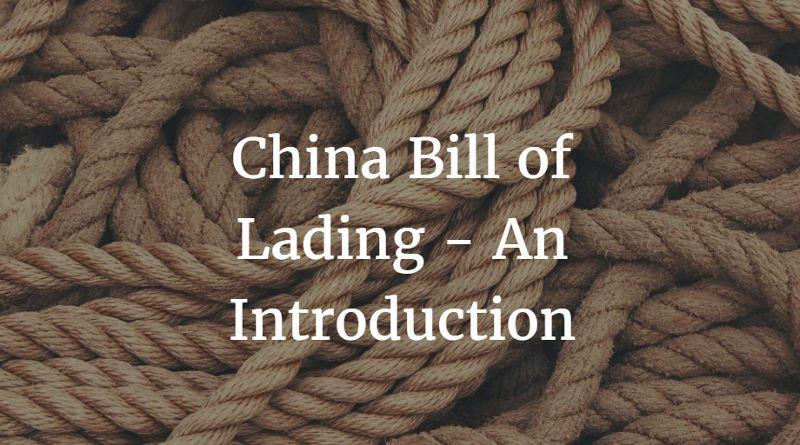 If you are planning on doing business in China, including importing or exporting merchandise, you will at some point almost certainly come across a China Bill of Lading document.
This is an official legal document used to ensure that all merchandise exported out of the country is correctly delivered.

Many foreign businesses are seeking to have their products manufactured in China, because of the many benefits the region has to offer. However, choosing a manufacturer, and having the goods delivered to you in your own country, does need to be carried out with care. To avoid scams and fraudulent behavior, you should carry out due diligence on the businesses in China that you are working with, and also verify documents that they send you, including the bill of lading.

By carrying out verification, you can be confident that the customs document shown to you by a Chinese company is valid and actually demonstrates a real shipment.

Like elsewhere, shipping companies in China issue a bill of lading with each shipment and this constitutes a legal contract between them (the carrier) and the shipper (the party sending the goods).

The document comes in many different forms, depending on the mode of transport, payment conditions and ownership of the merchandise being shipped.

There is a comprehensive overview provided in this excellent article by CargofromChina.com if you need more detailed information.

To help you recognize a China bill of lading, below are examples from 2 of the largest shipping companies, COSCO and Yang Ming. Both of these companies are commonly used for exporting products from China.

If you have received a bill of lading from a Chinese supplier you can confirm details and check the status of the shipment online. The website Track Trace includes tracking of shipments from over 40 major shipping companies including China’s largest, COSCO.

Using this website is a good way of verifying that the bill of lading document you have been provided is genuine.

Unfortunately we have heard many stories about Chinese scammers who have used forged or manipulated China bill of lading documents as ‘evidence’ to claim that their products have been shipped in order to request payment. At first glance they look very reassuring as they will specify many details of the order such as customers name, destination port and a list of the goods ordered, but we urge readers to exercise caution and not accept these at face value.

Regrettably, some of our customers have been cheated out of tens of thousands of dollars using fake documentation, so do take care.

Verifying a China Bill of Lading

China Checkup has received and verified many such documents through our Certificate Verification service, including fraudulent bill of lading documents claiming to be for the shipment of soybean oil and copper scrap among others.