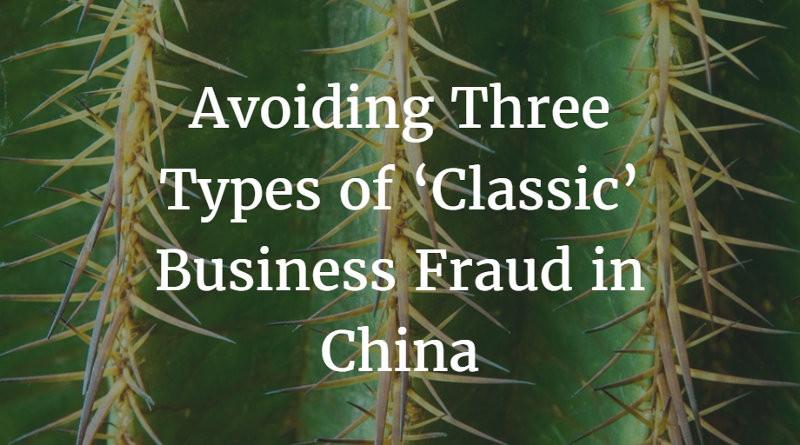 China Law Blog recently published their annual 'China Fraud Season' post, describing how fraudulent activities and scams in China seem to peak every year around December. Dan Harris lists a few types of what he described as ‘classic’ scams and fraud in China that are still going strong this year, or even seeing new twists. Dan went on to mention how these types of fraud might be avoided in some cases, but we’d like to add some of our own detail on avoiding these ‘classic’ scams.

There are various names for this scam. We’ve written about it before as the 'China visit scam', because that’s the central element of this type of fraud. Dan Harris describes one version of it as follows:

The general strategy of this scam is to convince a foreign company that a large order or deal is on the books for them, and then entice them to come out on a visit to do the necessary paperwork and seal the deal. Overly trusting victims are then likely to accept requests for gifts or payments, which the scammers will variously describe as payments to particular offices, ways of softening up necessary links in the chain or as sweeteners to the deal for important people. In any case, once these payments are made and the gifts have been bought, the ‘deal’ dries up and the ‘company’ disappears. You can probably imagine the various permutations this kind of fraud can take, but ultimately it boils down to the same strategy.

Dan Harris mentions simply contacting the Chinese company in question, independently of communications you have had so far. This is effective in the many cases where the scammers are simply pretending to be a legitimate company; contacting the real company would likely reveal the issue quite rapidly. You’d probably want to conduct more thorough due diligence first before committing to any China visit, though. What if the fraudsters have gone a step further and made some attempt at setting up a fake front organisation to conduct their fraud through?

Making basic background checks on the company in question would be likely to highlight the fact that something suspicious is going on. Such checks would reveal how long the company has been operating for, how much capital it registered, where it is based in China, and who its official representative is. These details would be much harder to fake and get past the eyes of the official registrars, making such background checks an affordable precaution against this kind of fraud. China Checkup makes background checks on Chinese companies affordable and accessible.

You can probably guess exactly how this scam works from the name. Simply put, an existing customer of a Chinese company receives an email from them (it’s usually an email, for reasons we’ll discuss below) explaining that they’ve got new bank account details and requesting payment to this new account. This type of scam is particularly insidious because it hijacks an existing relationship of trust, which is often enough to bypass the suspicious of people who would normally be wise enough to spot it.

As you might expect, this “new” bank account is very often a personal bank account and not a business one, and may even be in a totally different place to the company’s actual location. We’ve written before about the issue of registered bank accounts and business bank accounts of Chinese companies, and that advice is worth reading if you’re not aware of it. Simply put:

Read the article linked to above for more detail on these issues.

There are various possibilities for how this scam could occur involving a Chinese company:

There are probably more potential arrangements as well, but this gives you some idea of how feasible this scam is. The situation isn’t helped by the fact that it’s quite normal for Chinese companies to use generic email addresses from services like 163.com, meaning that scammers wishing to impersonate them have to put very little effort in, as covered here by QualityInspection.org.

Dan Harris also makes a couple of points about computer and email security in China:

The computer networks of many Chinese companies are not secure… Email is inherently insecure in China and you never know with whom you are really dealing when engaging in electronic communication with Chinese companies.

We think this doesn’t go far enough as a statement! It should simply be “email is extremely insecure”, full stop. (We’ll also add “computer networks are insecure.”) It doesn’t matter what country it’s in or who is operating it; email is a totally insecure system. If you’re not aware of this, it may help to imagine email as a system where postcards are sent between post boxes with locks on. Only you can open your post box to view what’s inside, but:

That description perhaps makes it sound slightly easier than it is to interfere with email communication, but the metaphor is generally a good one. The email protocol itself does almost nothing to ensure privacy or confirm who the sender is. Some email service providers do attempt to confirm that the 'sender' field is legitimate, but that field is still controlled by the sender and not the receiver. This is called email spoofing. Measures are slowly being developed to tackle it but as of 2013 it’s still very easy to do in many situations.

That might have seemed like a bit of a detour, but we feel it’s important to be aware of these kinds of issues in order to exercise proper caution. Always be a little bit suspicious, and always consider the possibility that things are not what they seem!

This is about as classic as a scam can get. Pretend to offer a product or service, accept payment for it, then don’t deliver what you offered. This one must have been serving scammers quite reliably for thousands of years, yet it still keeps cropping up in new variations and capturing new victims. As usual, it seems obvious when spoken about generally, but can be surprisingly hard to spot when its very specific to your own situation.

Dan Harris lists current versions of this scam including fake trademark registration, fake legal services, fake freight forwarders etc. Ultimately they boil down to the most basic possible kind of fraud. As usual, initial background checks offer a cheap way to avoid many of these cases. Looking up the official registration records of the company in question would reveal the majority of blatant scams, and allow more resources to be devoted to assessing the remaining shortlist of companies.

The post on China Law Blog ends with a brief anecdote about one such case of fraud:

"Many years ago, a company came to us after its multi-million dollar cargo had disappeared.  All we had to do was look at the shipper’s business license to know that it was a complete fake."

More than anything, this clearly illustrates why a China Company Verification really worth doing!

It is fast, inexpensive and can save you a lot of trouble down the line.