Alibaba Fraud Risk Highlighted by Their Own Survey! 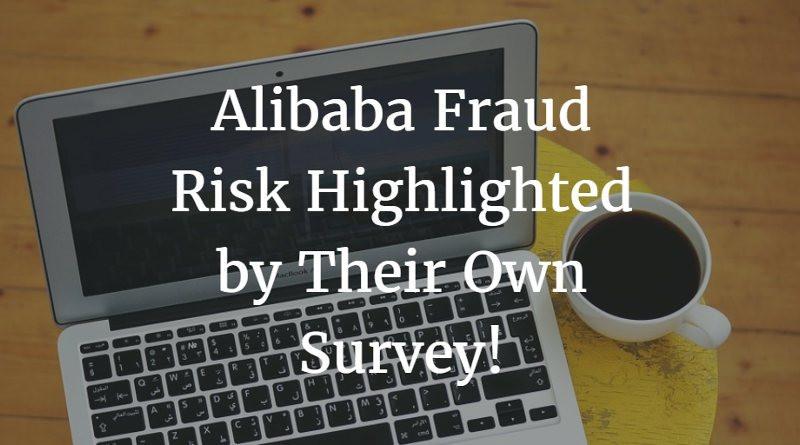 Alibaba Fraud Risk Highlighted by Their Own Survey!

This article was written by Pierre Furlan, an intern from Germany who assisted China Checkup during the summer of 2014.

Alibaba is the world’s largest small business B2B trading platform, but for many users using Alibaba fraud continues to be a huge concern.

If you are considering making a purchase from Alibaba you most likely have thought about the security of this trade. And rightly so…

An Alibaba discussion board survey reveals what buyers complain the most about purchasing a product from a Chinese company.

Let’s take a look at the results of their survey on the right:

As you can see, Alibaba’s readers identified that being scammed by a Chinese company is the biggest problem encountered when buying from China.

This answer was far ahead of other complaints such as poor product quality, shipment delays and high minimum order quantity.

Almost a quarter (23%) of respondents identified that they had been scammed by a Chinese company, highlighting the high risk of doing business with a manufacturer, middle-man or retailer in China.

It seems that even purchases made through this well-known platform – which claims to check their gold members and conduct onsite inspections – provides only a very limited level of security for the buyer.

Relying on Alibaba’s verifications of their own members (i.e. their customers) is clearly insufficient when carrying out due diligence on Chinese suppliers.

Alibaba does ban some members and you can read more about that here.

There are No Guarantees of a Safe Transaction

A key problem for buyers is the lack of assurance for transactions, whether made directly or over a B2B platform.

This is a particularly large problem due to the larger number of scammers, many of whom are becoming more and more sophisticated.

It is important for companies to exercise a great deal of caution in advance of doing transactions with companies they find on Alibaba or other B2B platforms.

This well-known scam appears to be very simple to detect, but can do much damage to the affected company when successful.

Typically the scammer attempts to hack a supplier’s corporate email account and find invoices they have sent to customers.

Now, with access to their email account, the scammer re-sends the invoices to the same recipients with an update to the company’s banking details and an excuse for sending the invoice twice.

The scammers’ bank details usually lead to another country, which is often Hong Kong, and thus chasing money and scammers is often a hopeless affair.

This scam demonstrates the potential risk of making a visit to a Chinese company, especially if it is in order to “seal the deal”.

In this type of scam the Chinese company places a large order with a foreign company, then asks that a representative comes to China to sign the contract.

Upon arrival the representative is either expected to pay for a banquet or is invited to an expensive looking meal at which the contract is signed.

The victim is then told to pay a high notary fee and buy expensive gifts for the company’s officials, under the guise that this is a traditional Chinese custom. The victim’s motivation to follow the claims is simply not to lose face, especially with the apparent large order in mind.

After both parties signed the contract it often takes weeks until the affected company realizes that there has never actually been a real deal.

Here are some articles we have previously written about avoiding scams:

How to Avoid an Alibaba Scam: 12 techniques to keep you in the clear

Real Life Examples of Online Scams and Fraud in China

In May 2015 Alibaba again made global headlines as a group of leading brands accused them of allowing counterfeit goods to be sold in bulk to USA customers on their website.

Gucci, Yves Saint Laurent, Puma and other brands grouped together to sue over the continued ongoing availability of fake products on Alibaba’s websites, alleging that Alibaba “knowingly assist these counterfeiters in virtually all aspects of their illegal operations”.

How China Checkup Can Help Keep Your Business Safe

The lack of confidence in Chinese companies through fraudulent activities has encouraged China Checkup to develop a range of convenient verification services, which help address Alibaba fraud-related risks.

In the last three decades the global supply chain shift has led to a huge development of manufacturing, research and development in China. Low production costs attracted staggering levels of foreign investment, leading to outsourced production on a previously unseen scale.

The resulting technology transfer has helped contribute to large-scale urbanization and increased domestic demand, placing China in the economically strong position it finds itself in today.

Have no doubt, China’s explosive growth certainly is real; figures such as growing domestic consumption, high sales (e.g. vehicle and cement production) and material imports (such as metals and oil) demonstrate this clearly. Nevertheless, the Chinese authorities have had difficulties maintaining economic order and providing accountability and transparency.