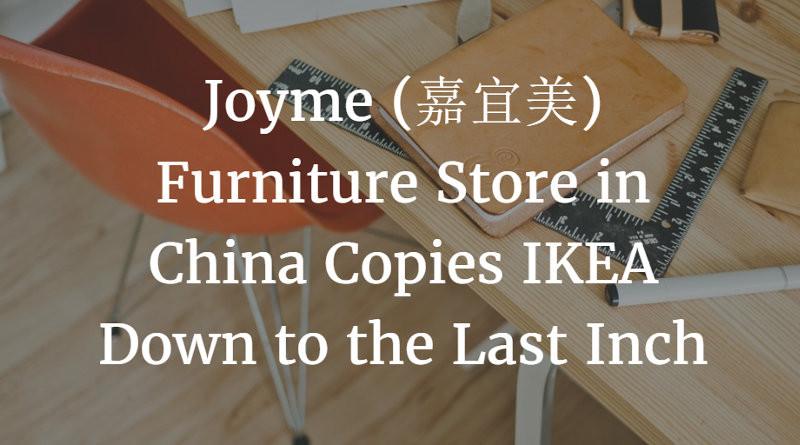 IKEA furniture shops are heaven to some and hell to others, but there’s no doubt that the system is effective in herding hordes of shoppers through the building and extracting money from them in the process.

This fact didn’t go unnoticed by one of the furniture giant’s suppliers in China, who have now set up shop in Beijing with a complete clone of their client’s business model.

Joyme (嘉宜美) seems to have copied the IKEA model down to a tee, from the initial hands-on demonstration section with characterised series of products, reference tags and little pencil dispensers, to the warehouse below where the willpower of shoppers has been exhausted and they succumb to buying everything that caught their eye upstairs.

Residents of Beijing’s Wangjing neighbourhood, where Beijing’s main IKEA store is based, had been hoping for some time that the multinational chain might establish a store elsewhere in the city. With the only store being in Wangjing, traffic and congestion in that area had become unbearable.

The prayers of Wangjing’s residents may now have been answered, but not in the form they were expecting. Joyme’s new store isn’t close to IKEA geographically, but 90% of its products are identical to IKEA’s.

A relevant figure at Joyme had no qualms in admitting that their brand has copied IKEA’s model and products wholesale (no pun intended), acknowledging that they had been able to copy product designs through carrying out production as an IKEA subcontractor.

Joyme subcontracted for IKEA for 16 years before establishing an online store selling their own products on T-Mall in October 2013. The company say they made the decision to split from IKEA in 2011 due to IKEA’s demands on pricing.

A spokesperson said that Inter IKEA System B.V., the owner of the IKEA brand, takes every possible legal measure to protect its intellectual property, and that it would take legal action against anyone who infringed on its IP rights.

Why are IKEA’s Suppliers Leaving One After Another?

IKEA began working with Chinese suppliers in the 1990s. As the world’s number one seller of home furnishings, IKEA has massive demand for products, and also continuously gives huge orders to its suppliers.  So why are companies who have been co-operating with IKEA for years now deciding to part ways? The answer from these suppliers is that their profits are constantly being driven down.

Is Opening a Store Copying IKEA a Rights Violation?

“We subcontracted for IKEA for more than 10 years, so our knowledge of their products was quite deep. As we learnt from IKEA on all aspects of the process, you could say that we have copied IKEA,” said Cao Yuewei, president of Heilongjiang Hardwood Industries (aka Joyme).

He hopes that this will not lead to legal action from IKEA: “There are many things worth learning from IKEA, and if you learn from someone it’s inevitable that you will have similarities with them. We believe that after a while we will develop our own style.”

Does IKEA Have IP Rights to All of the Products It Sells?

Joyme’s approach has caused controversy because of the high level of similarity between the two brands, especially in the design of their furniture. Regarding this, a figure at Joyme previously stated emphatically that they do not believe they have infringed on IKEA’s IP rights. The spokesperson stated that “IKEA only owns IP for about 30% of the products it sells,” but did not give any evidence for this claim.

Due to demands for low prices, Heilongjiang Hardwood Industries split from IKEA in 2011 and established its own brand, Joyme. When it’s physical offline store appeared in Beijing, it was a complete clone of IKEA, but with prices about 30% lower. Many people first go to IKEA to look at products, then go to Joyme to buy them. Do you believe that completely copying IKEA in this way is infringement of IP rights, and how do you view this brand?

China Checkup: It has to be said that this was quite a poorly designed poll, with heavily weighted options and loaded wording.

Would you buy Joyme’s products?

China Checkup: What do you think? What will be the outcome of this for Joyme and IKEA?