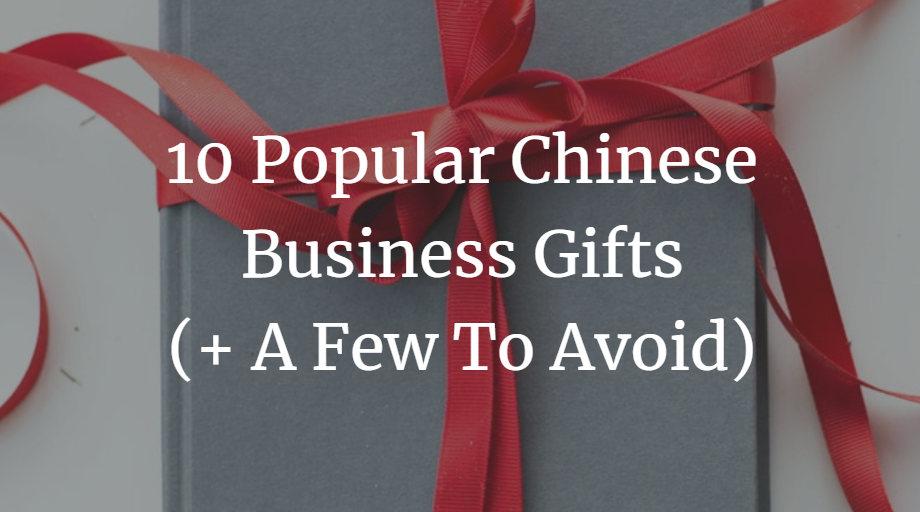 Here we introduce some Chinese business gifts which are commonly presented to customers, guests and employees by companies in China.

Like elsewhere in the world, giving gifts is a good way of communicating and to build relationships, but the traditions in China are likely to be a bit different to in your country.

Exchanging gifts is an important part of Chinese business culture and giving the wrong gift can lead to embarrassment and misunderstandings, so we have covered some of the Chinese business gifts to avoid in this article too.

Whether it be to guests, customers, partners or employees, many Chinese companies can be very generous when it comes to giving out gifts.

China is a huge and diverse country and just like elsewhere in the world, the act of giving a gift can be very personal, so Chinese companies often give gifts which reflect their company's industry or local specialities.

However, there are certain Chinese business gifts which seem particularly popular, and these are introduced below:

Visit any airport in China and you will typically find a gadget shop selling the latest electronics to an eager audience.

Recent high-profile technological innovations by Chinese companies in the area of electronic products has helped to make electronics more affordable and markedly increase their popularity.

Chinese companies haven't been slow to notice this trend and now commonly give out electronic gadgets as gifts.

Tea is grown in many parts of China and giving locally-produced tea leaves is one of the most popular Chinese business gifts.

Rather than coming in tea bags, tea leaves in China are typically presented in vacuum packed bags or in tins with quite elaborate packaging.

Sometimes it can presented together with a tea cup set and many companies also like to give guests a tea drinking ceremony upon arrival.

Not long ago considered a foreign curiosity, the demand for red wine in China is growing year on year and its consumption is increasingly seen as mainstream.

With fierce competition between importers and some popular local brands there is a huge range of products on the market which make for a great business gift. The fact that red wine is red - China's favourite colour - doesn't hurt either!

China's national liquor, Baijiu is a clear spirit made from grain which is very strong and has, let's just say, an "acquired taste".

Commonly drank during business dinners to shouts of "Gan Bei", it is also makes for a popular gift to business partners and clients.

Not only do Chinese companies like to treat visitors to some delicious fruit around the meeting table, but they also like to present a box of fruit as a gift when they leave.

Imported cherries and locally-grown fruits are particularly popular as business gifts and make for a healthy alternative to some of the other popular gifts in this list.

Do note that you won't usually find pears being gifted - this is because the character for pear, 梨 (Lí) is pronounced the same as 离 - which means 'to separate'.

It is quite common for Chinese companies to give hongbao to employees and partners during holidays and other times of celebration.

The whole concept of receiving a gift of cash can be very uncomfortable for foreign visitors to China and sound judgement is needed to know the difference between respectfully taking part in this custom and accepting a bribe.

Businesses across China celebrate the Mid-Autumn festival by buying and gifting hundreds of millions of mooncakes to their employees and customers.

As you can imagine it is a huge industry and manufacturers are creating new versions with different flavours and packaging year on year.

Whilst not to everyone's tastes, if you are visiting China during late summer or early autumn you will almost certainly receive some mooncakes to try.

With China producing over half of the world's silk it comes as no surprise that many Chinese companies favour this luxury product as a business gift.

There is no better example of this than the G20 summit held in Hangzhou in 2016 where world leaders were showered with beautiful silk gifts.

In China special delicacies are highly treasured and perhaps nothing illustrates that better than the love of eating hairy crabs.

Every autumn is hairy crab season and giving a nicely packaged gift box of crabs has become increasingly popular for Chinese businesses in recent years.

In case you are doubting whether this is true, consider this - hairy crabs are so popular in China that they are even sold in vending machines!

If we had written this article 10-20 years ago cigarettes might have been given the number 1 spot, but these days their popularity as a Chinese business gift is waning.

Smoking is still very popular in China though, and to many people, smoking cigarette brands such as Chunghwa is still seen as a status symbol.

There are some gifts that should be given with great care or avoided altogether in China, either because they have bad connotations or are associated with unhappy events.

Here are a few Chinese business gifts to steer well clear of:

If you only remember one thing from reading this article, remember this - do not give a clock as a gift in China! It really is a taboo.

Hats make for great gifts as they represent a wide range of cultures such as a Turkish Fez, a Mexican Sombrero, French Beret or Russian Ushanka.

Most Chinese would be thrilled to receive such a gift - just make sure it isn't green.

Gifting a bouquet of flowers is common in many cultures and makes for a nice gesture.

If you want to send flowers to a Chinese business partner it would be sensible to avoid sending chrysanthemums or white flowers in general in case they cause offence.

Less risky than the other 3 gifts in this section, giving a book can be a nice way to share some insights and values.

However, gifting a book during a period of negotiations could be taken as a subtle sign that you want the receiver to lose, so if you are thinking about presenting a book, tread carefully!

Planning a Business Trip to China?

Before you make an expensive and time-consuming trip to China have you thought about verifying the Chinese company you are dealing with?

Verifying is quick, convenient and affordable & can help protect your business from the risk of fraud.