Keeping Your Wits About You on China Supplier Visits 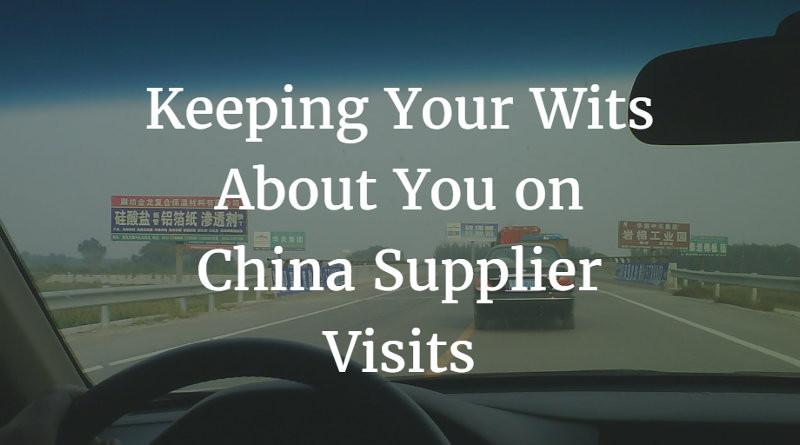 Keeping Your Wits About You on China Supplier Visits

There are some great stories online about the unbelievable things that can be revealed during visits to suppliers in China. Some of my favourites include Renaud Anjoran’s story about being shown the same factory twice in one day, and Etienne Charlier’s write-up of disastrously low quality turbine production. Here I’d like to add to that collection with a little story of my own.

I’d been living in China for some time, studying Chinese and trying to find work that wasn’t teaching English. Fortunately, a contact I had in Australia knew about my engineering background and contacted me to ask if I’d be interested in doing auditing work for his company. They needed someone to audit glass wool insulation factories in a certain town in China.

Anyone in Australia at the moment will instantly think of the infamous government campaign that led to this. At the time, Australian Prime Minister Kevin Rudd was implementing the "Energy Efficient Homes Package", which was intended to encourage environmentally-friendly home insulation by providing government subsidies. The upshot of this for the China sourcing field was that there was a surge of Australian businesspeople looking to get glass wool insulation in China and pass the costs on to the government.

Glass wool suppliers in China were delighted to sell to Australian companies at a huge mark-up on the usual price, and everyone was happy apart from the Australian taxpayer, who was ultimately paying for this arrangement. The particular town I would be doing my audits in had eight such glass wool suppliers, and was soon getting inundated with Australians looking to buy from them. Many companies were sending teams to China who had little to no knowledge or experience of sourcing there. You can imagine the results.

The town itself, in Hebei, had quite a bizarre atmosphere. There was insulation material everywhere – on the streets, on buildings, in trees. Even fields had been allocated as storage, with mountains of insulation batts piled up in them. Eating there was always a bit of an anxious experience as you worried about being served a bowl of glass wool noodles. Every now and then a piece of glass wool tumble-weed would roll across the road.

In any case, this was my opportunity, as a young engineer, to get into auditing. I had a dozen audits scheduled across three weeks, revisiting those eight factories on behalf of various Australian buyers. It was towards the end of this rush, when I was heading to a factory for the third time to carry out an audit, that this strange event took place.

I was in a taxi heading to the factory, and by this point I knew the directions quite well. The taxi driver, however, was less than confident in the local navigation abilities of a foreigner. Perhaps my accent didn’t help, either. We were going over a bridge when a car parked by the side of the road started following my taxi, the driver waving at the taxi driver to pull over. The taxi driver seemed relieved when the driver of the other car came over and seemed to want to offer directions.

This guy spoke to the taxi driver, asking about what factory I was visiting. My Chinese was good enough to get the gist but not all of the details. The guy pulled out a business card and said to the taxi driver that he was the manager of the factory and that they’d been waiting for me. This did set some alarm bells ringing as I knew the manager of the factory, and also knew that no Chinese factory manager would be driving the beat-up old car that this guy was getting around in. The alarm bells were only faint at this point though.

The guy set off in his car again, with me following in the taxi. When we got to the factory, things got even stranger. The mysterious ‘manager’ shook my hand, welcomed me, and asked what I was looking to purchase, all in English. I tried to explain, also in English, that I was there to audit the factory, not to purchase anything, but he didn’t seem too deterred by this and took me inside.

Inside the factory, he walked around as if he owned the place, but the staff paid little attention to him. He seemed to be searching for an empty room, and upon finding one, took me inside. He even went off and came back with some tea for me. By this point I knew something was amiss; I’d been to this factory twice before and knew most of the administrative staff there. I’d never seen this guy before.

Eventually one of the factory’s staff arrived, and my new acquaintance
immediately started explaining to her, in Chinese, that he was my representative and started listing things that I apparently would like to purchase that day. This member of staff had met me before and knew I was an auditor. She seemed very confused, but she was a young graduate and quite a shy person, and didn’t say anything.

Instead, the guy kept talking and explaining what I would like to purchase. He was apparently unaware that I could understand the gist of what he was saying. I said to the member of staff that I needed to talk to her outside. In the corridor, I explained that this guy is clearly a fraudster trying to trick everyone. We needed to call the police. More members of staff went into the meeting room, and I waited in the corridor for about ten minutes.

Eventually, this guy came out of the room and made his way out of the factory at some speed. As soon as he was outside he got in his car and rushed away. Perhaps he went back to wait for more Australians at the bridge.

Obviously this fraudster had seen an opportunity in the influx of Australians coming into the town and was taking what chances he could! I’ll give him this: he had guts. His scheme was to take advantage of language barriers to present one role to the factory and another to the buyer without either side realizing. Presumably he would insert himself in the middle of any deal and take a hefty cut of it. This excess cost would get swallowed up by the government scheme in Australia, and it’s likely no-one would really notice.

If I had actually been a buyer from Australia, this plan would almost certainly have worked. Chances are that a buyer from Australia would not have learnt much Chinese before, if at all. They might well be relying on the factory staff speaking some English. On the other side, the factory staff probably wouldn’t be confident enough in their English to question what this guy was saying to buyers he brought. And in any case, why would they care so long as the buyer is paying?

The story goes to show that basic language skills and a little bit of knowledge of your China supplier can go a long way. Also, just about anything can happen so it pays to be on your toes. Everyone learnt a lesson that day; the factory and I learnt to be on the lookout for fraudsters carrying out this kind of scam, and the fraudster probably learnt to be a little less blatant with his language tricks.