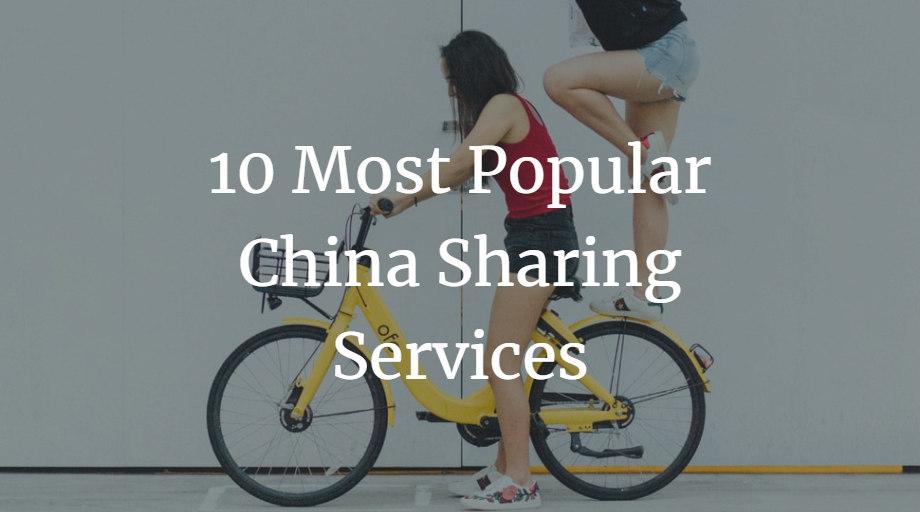 Visit any Chinese city these days and you are bound to see rows and rows of brightly colored shared bicycles - they are the most visible of the many China sharing services.

Whilst shared bicycles might be the most well known, they are far from the only popular shared service in China though.

Keep reading to learn more about how shared bicycles and some of the other popular China sharing services work, including battery packs, sports equipment and cars!

What are China Sharing Services?

In cities like Shanghai or Beijing, most young people, rather than owning their own bicycle, will regularly use shared bicycles to get around town. Doing so means they no longer need to buy, maintain and store a bicycle - and because the bicycles are so numerous, they are always close to hand.

The same concept is true of other China sharing services - rather than purchasing their own equipment, many Chinese are joining the "shared economy" and accessing it as a sharing service.

Each of these shared services are highly dependent on technology and the widespread use of smartphones in China to facilitate users locating, accessing and paying for the services they offer.

Why are Sharing Services Popular in China?

Sharing services have really taken off in China as the concept of the shared economy has been embraced by their young city dwellers.

In China's numerous mega-cities, where millions of people live in tightly packed apartment blocks, this high density living particularly lends itself to sharing services because:

Users predominantly get use of sharing services via their smartphones, which allows them to be located, accessed and paid for with ease.

Although many sharing services have their own apps, mostly they are accessed through mini-programs in user's Wechat or Alipay accounts.

In China, the use of Wechat and Alipay is almost universal, including for making mobile payments, meaning users are each assigned a credit score. Having a good credit score means shared services can be accessed with paying a deposit.

This presents China sharing services with a couple of big advantages:

Various shared services partner with Alipay or Tencent to promote their offering - for example Alipay users usually use Hellobike bicycles, whilst Wechat users tend to use Mobike.

This list is in order based on what we perceive to be the most popular China sharing services, and is far from scientific! We give a popularity score out of 5 for each service.

This article was published in August 2019 and it's going to be fun looking back in a few years time when surely more and more sharing services have come online! Like any new industry expect to see plenty of innovation, but no shortage of companies failing to make it to profitability!

The most famous China sharing service, shared bicycles can be found cluttering sidewalks in urban areas across the country.

I first became aware of the appearance of shared bicycles on Shanghai's roads in 2015. Just two years later the entire city was overladen with them - it was an incredible transformation.

Whilst the bicycles undoubtedly offer great convenience and encourage exercise, the sheer number of bikes produced has led to terrible waste and resulted in the creation of infamous shared bicycle graveyards, such as the image here.

Chinese bicycle sharing companies have expanded their services overseas but with mixed success. For example Mobike setup operations in both Manchester, UK and on Australia's Gold Coast to much fanfare, but both service have now been withdrawn.

In smartphone-obsessed China making sure your hand device is always charged is serious business.

Although not as immediately visible as the bicycles, walk around a Chinese shopping center and you will find that these charging boxes sitting on nearly every shop counter.

Unlike other China sharing services, a common approach to sharing umbrellas is yet to emerge.

Some companies offer umbrellas with locks (much like the bicycles) which are attached to public fences, others choose to place umbrella stands in popular locations - such as the image here.

It has been reported that because umbrellas are easy to misplace or damage, companies ask for a large deposit and actually don't mind if umbrellas aren't returned!

Some of China's cities are rather hilly - Chongqing springs to mind - so a regular bicycle might not be so attractive for many journeys.

Enter the electric bicycle! It looks like a regular bicycle, but has a battery and a motor to help you get up the hills.

Although Shanghai is a very flat city, we found that approximately 1 in 100 Hellobike bicycles available in Shanghai are the electric variety and they cost twice as much to use as the standard bicycles.

The only China sharing service from our list which is delivered to your door - a shared wardrobe allows customers to wear designer brands at a fraction of the cost of buying them individually.

Unsurprisingly, each shared wardrobe service's website focuses not only on their fashions, but also the clothes cleaning process, as essentially the business model is based on the difficult proposition of persuading people to wear pre-loved clothes.

The majority of China's shared car services use electric cars, which means they need regular charging, rather than filling up with gasoline.

Useful for short journeys around town, one of my employees' cousins regularly uses shared cars to get to the airport and avoid parking fees.

It's not common to see shared cars in Shanghai, but just before publishing this article an EVCARD vehicle pulled up at the traffic lights alongside my taxi, so maybe there are more around than I realized.

Before shared services, various kinds of mopeds (a.k.a. silent killers!) were actually more common on China's roads than the humble pedal bicycle, so it was always inevitable that they would become a shared service too.

From what I've researched, there have been numerous attempts to establish shared moped services in China's smaller, less busy cities, but without much success.

There have been many attempts in China to create sports-based sharing services.

In Shanghai, Joyway operates a number of sports grounds where you need to use their app to get through the turnstile and enter.

Meanwhile, during a recent visit to Shandong province this unusual sculpture of a cyclist in a park caught my attention! Turned out that, rather than being a sculpture, it was two cabinets of shared sport equipments such as badminton sets, basketballs & skipping ropes.

There was also a shared basketballs service available at one point, but it seems to have gone out of business.

The stroller sharing services I've seen in China were all inside shopping centers and presumably users are encouraged to stay within their four walls.

There is quite a diverse range of stroller service designs, from Panda 100's tricycle-like contraption, to Xiaomuma's tech-focused offering with an internal TV screen for the kids.

Sharing services aren't just popular in China's urban areas, they have also made it to their many fun parks and tourist attractions.

Hellobike have developed a shared tandem which I recently found was being offered whilst visiting a tourist agricultural park in rural Shandong province.

According to their website, Hellobike are not content with just offering tandems though - they have also started offering these shared quadracycles!

As you may have gathered sharing services are really popular in China at the moment and services touted as such are attracting a lot of investment.

This had led to some more traditional services being branded as "sharing services" even though they don't really match the criteria - the way I see it is that if a service can't be taken away or moved somewhere, it's just a regular service!

Take for example a coin-operated kid's ride at a supermarket, I wouldn't call that a "sharing service", although it is used by lots of different children.

Anyhow, here are some examples:

Have You Seen Other China Sharing Services?

If so, we'd love to hear from you! Please get in touch with us at info@chinacheckup.com with some details. Thanks for reading.