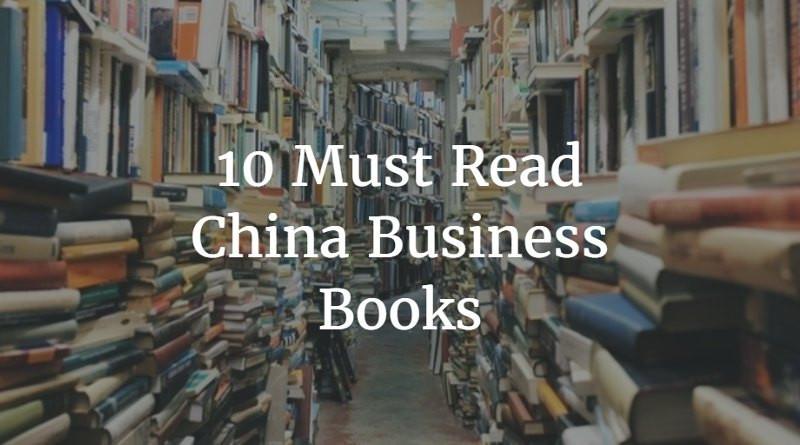 Business in China is a huge topic that can keep you learning for a lifetime. There’s a wealth of information about it online, but sometimes it’s good to benefit from the level of research and work that goes into producing a book.

We’ve gathered up 10 China business books that we feel provide a lot of depth and understanding that will be useful to anyone involved in business with China.

While compiling the list, we tried to include some unusual choices and avoid some of the more common recommendations. There’s a mix of business, history and political content in the books listed here, all of which can be relevant to successful business in China.

We tried to keep the cliché-ometer happy by avoiding any books with the words “red”, “dragon” or “billion” in the title, but in one case we had to make an exception!

China CEO gathers together the knowledge of executives and consultants working in China. The authors of this book shortlisted and interviewed high-level figures from some of the top global businesses currently working in China, including Coca-Cola, Bayer, British Petroleum and others.

This book is the result of those interviews being compiled and arranged by topic, and manages to compact a lot of insight into a standard-length book (around 250 pages).

It’s not without it’s flaws though. The title alone hints at the slightly self-congratulating tone that runs throughout the book, and it often veers into interesting anecdotes and over-extended China analyses.

Overall, though, this is one of the most useful China business books for anyone doing business in China.

You might be wondering what a basketball book is doing on this list, but Operation Yao Ming is actually an account of interaction between the Chinese and American sports industries through the iconic basketball player.

Larmer reveals much about the inner workings of both sides, from America’s multibillion-dollar sports empire to China’s attempts to systematically produce sports stars.

There is a lot to be learned about cross-border business, and the economic and political aspects of doing business in China.

This is the first history book on the list. It’s written by one of the most prominent and well-known historians of China, Jonathan Spence, so you’re in good hands.

The book might be taken as something of a warning: it describes the stories of “foreign missionaries, soldiers, doctors, teachers, engineers, and revolutionaries” who came to China over hundreds of years with the same goal in mind: “to change China”.

In the modern world, “the tales in this volume will serve as cautionary histories for businessmen, diplomats, students, or any other foreigners who foolishly believe that they can transform this vast, enigmatic country”.

It’s not uncommon to meet people in China today who appear to have some similar kind of goal. This book is relevant for those people and for everyone that encounters them.

Back to more practical matters, this is the most narrowly focused book on the list, and unsurprisingly is most relevant to those doing trade via the Alibaba platform.

You may want to skip some of the bumf sections, including the indulgent interview of Jack Ma at the beginning. However, the rest of the book is a good grounding in the fundamentals of trading via the Alibaba platform.

5. Business Leadership in China: How to Blend Best Western Practices with Chinese Wisdom

Despite the unfortunate title (West → “best”, China → “wisdom”), this book covers a lot of ground for those taking on leadership roles in China, particularly in managing Chinese or international staff in China.

Business Leadership in China offers opinions on a wide range of relevant issues, the most insightful of which being its coverage of maintaining employee motivation in China, and common causes for misunderstanding between Chinese staff and those from other countries.

6. The China Price: The True Cost of Chinese Competitive

The most negative book on our list, The China Price seeks to expose the methods and situation that allow Chinese suppliers to offer such low prices. The resulting picture is disturbing and at times horrific. The book also demonstrates the widely differing ability of client companies from other countries to detect and care about these issues.

However, The China Price isn’t entirely negative, and moves on to show how change is coming. It’s also important to remember that in the 6 years since the book was published, a lot has changed in the China production sector, mostly for the better.

In any case, this remains a highly relevant and informative book for anyone doing business in China.

7. One Billion Customers: Lessons from the Front Lines of Doing Business in China

If you like case studies (and who in business doesn’t?), this book will appeal to you. Like many of the other books on this list, it’s the author’s attempt to condense his own experience into a healthy dose of China knowledge.

A major attraction of this book is how it codifies the knowledge it presents into concrete strategies (over 100 of them) and actionable advice.

You might also find it telling that China’s thriving pirate translation industry has produced several versions of this book (with varying levels of quality) in Chinese for the Chinese business books market.

One thing we could have done without in One Billion Customers were the over-the-top metaphors, which the author seems to have in endless supply. There is also the usual attempt to “understand China” and explain something called “the Chinese mind”, which are dubious ideas at best. Despite that, the book is insightful and well worth reading.

8. Where East Eats West: The Street-Smarts Guide to Business in China

According to the blurb, Where East Eats West has been incorporated into the MBA programs of Boston College, Rutgers and Colorado State University. In any case, it’s a great book with a nice approach: it aims to be “an airplane book”, which is a concept we like.

Inevitably with such an approach, Where East Eats West is somewhat superficial and focuses far more on personal experience and anecdote than some other titles on this list. We did appreciate it’s frankness and focus on the author’s own mistakes and misconceptions (rather than trying to imply that problems stem from something inherent about China, as many writers do).

9. Mao’s China and After

Another history book. These are worth reading for business people as they provide the general framework to which more focused business knowledge can be attached.

Mao’s China and After is a road into China’s modern history and the experiences of current generations up the millennium. That may seem like ancient history in the business world, but almost all the influencers and wielders of power in China today emerged from this recent history.

Many in the business world may feel it’s not essential to understand this background knowledge about China’s recent history, and it certainly won’t offer immediate insight into day-to-day operations and interactions. However, when viewing the bigger picture, this kind of knowledge can be the key to understanding.

Finally, for anyone looking to set up a business in China, this book comes highly recommended. Whilst setting up my business in 2011 this book made for fantastic reading and really helped me understand what I was signing up to and how to avoid the numerous pitfalls.

This China business book features countless real life stories and anecdotes from an author who has been there and seen it all.