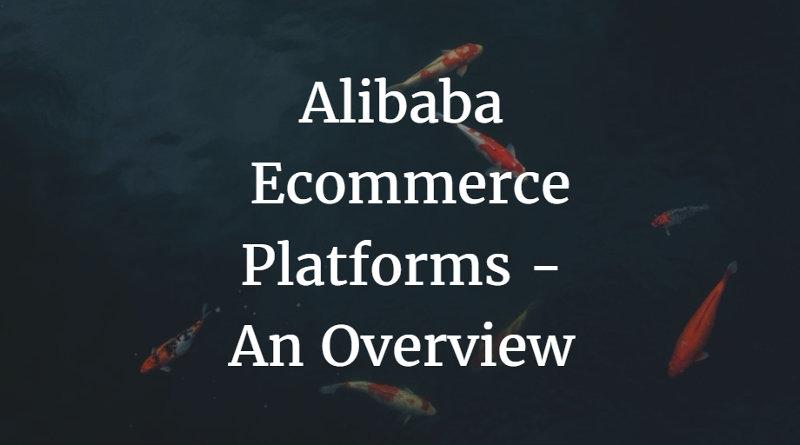 Apart from the ubiquitous sourcing b2b platform alibaba.com, do you know any of the other Alibaba ecommerce platforms?

Although the origins of Jack Ma's company were in helping Chinese companies sell their wares overseas, these days Alibaba has grown to become China's largest tech company.

This article gives an overview of the main Alibaba ecommerce platforms, most of which are aimed squarely at China's domestic market - notably the country's largest online marketplace "Taobao".

Development of the Alibaba Ecommerce Platforms

Outside of China, Alibaba Group is best known for the business-to-business (b2b) sourcing platform it was originally named after - Alibaba.com.

But actually to most Chinese it is shopping on their domestic ecommerce platform "Taobao" that made the company a household name.

Indeed it is the success of Alibaba's domestic ecommerce platforms that have been the key factor to their incredible growth.

Remarkably, only 5.4% of Alibaba's eye-popping $15.7 billion annual revenue in 2016 came from their original alibaba.com b2b platform.

As an industry pioneer, Alibaba has also greatly benefited from the huge increase in ecommerce and online shopping in China, a sector for which China is a genuine market leader.

Comparisons between Alibaba and Amazon are popular, but also a little misleading - because unlike Amazon, Alibaba doesn't actually sell their own products or ship them to customers.

The different Alibaba ecommerce platforms are each mainly targeted to the needs of these buyers, based on their location (domestic or overseas), order size and product requirements.

For an international audience the best way to categorize Alibaba Ecommerce Platforms is by language - their Chinese language websites are for a domestic audience, their English (and other foreign language) websites are for overseas audiences.

Of Alibaba's many ecommerce platforms, only two are available in English.

If you have ever tried to source a product from China you will almost certainly have visited this platform previously.

Although there are other websites offering similar services, none can match the incredible range of products and suppliers available on alibaba.com.

Despite carrying out many initiatives to reduce counterfeiting and eliminate scammers, the marketplace nature of the Alibaba website means users should approach with a "buyer beware" mindset.

Resembling an international version of Taobao, Aliexpress allows overseas consumers to purchase products directly from Chinese companies. In practice there is a lot of overlap with c2c as Chinese citizens can register a store too.

With millions of consumer products very attractively priced it is no wonder that this website has been a success; but at the same time, stories of disappointed customers receiving sub-standard goods are common.

Aimed at consumers worldwide, Aliexpress has been particularly successful in Russia and Brazil.

Despite starting off with their English language alibaba.com website, today the majority of the Alibaba ecommerce platforms are for domestic consumption and are in Chinese.

Although often compared with Amazon, a better comparison for Taobao would be with eBay.

Taobao is largely responsible for revolutionizing the way the Chinese buy products, developing a small internet shopping market into the world's largest.

Nowadays, couriers whizzing around on scooters piled high with parcels is a common site in urban China, and many of these are delivering goods bought on Taobao.

With a huge number of stores on Taobao offering products of varying quality, Chinese consumers like to pay close attention to each seller's ranking and sales history, even if they are not entirely trusted.

TMall is a platform for reputable brands to register and sell their products online in China.

It caters mainly to the growing middle class who want the peace of mind of buying from more established companies, who can offer solid guarantees and provide better after-sales support.

Just as foreign companies look to source products from China, domestic Chinese companies also have this need, and 1688.com is their go-to website.

Fliggy (or flying pig as it is called in Chinese) is Alibaba's ecommerce platform for selling travel services, such as flights, hotel rooms, activities, holidays and train tickets.

Competing in an industry with established heavyweights such as Qunar and Ctrip, it hasn't yet captured the biggest market share, but with Alibaba's track record it might just be a matter of time before it does.

Cashed up Alibaba Group has been making many overseas investments in recent years, in a number of different industry sectors. Examples include their purchase of Hong Kong's South China Morning Post newspaper and their investment in ride-hailing service Didi Chuxing.

In terms of ecommerce platforms however, their most significant move was their $1bn spend for a majority stake in Lazada in 2016.

Whereas Alibaba's ecommerce platforms are all marketplaces, their takeover of Lazada has created the intriguing prospect of direct competition with Amazon.

Although Lazada has now adopted many of the marketplace features that Alibaba specializes in, they were originally setup and continue to operate with their own warehouses shipping goods directly to their customers.